Jio Studios and Vishesh Films Entertainment's Rajnish Hi Sahi is just an elaborate rehash of all the films Mahesh Bhatt has made on his relationship with Parveen Babi. While the story is very stereotypically handled, what stays with you is Bombay! Ranjish Hi Sahi streams on Voot Select. 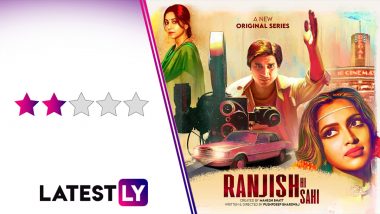 Shankar Vats (Tahir Raj Bhasin) is an aspiring filmmaker who is looking to become rich one day. After four flops, he decides he will have the diva of the industry Amna Parvez (Amala Paul) in his next film. The issue is, she has no idea he exists! Amna has her own demons to fight with Zubair (Rajat Kaul) her star boyfriend as he just can't keep his hands off women. Things happen and Shankar meet Aamna and the down spiral begins.

The thing with Mahesh Bhatt who holds the 'created by' title, is that movies or series based on his life seems like a justification for his actions.  While Shankar keeps saying 'Humne jo kiya woh galat hai', the character keeps seeking validation for his action saying 'Mei iss samaj ko nahi maanta.' Pick a side man!

Truth be told, Parveen Babi's character does get to be little more than a maniacal alcoholic. Even then it's not enough. This fixation to prove that Babi's schizophrenia was only because of the many men in her life has started to feel very agenda-driven. As that always sells. Her mother's transactional equation with her should have been explored more. That would have explained why she was always deprived of love and why she was so desperate to cling to her men for it.

The execution starts sloppy as the second episode shows the entire sequence from the first one from Amna's perspective. You might start wondering are you watching the same episode again.

The series shuttles between '70s, '80s and early 2000's. The settings and costumes are quite tastefully done. The movie references to some of the bit hits of that era do please you and so does Vinod Kumar in an ashram. We all know where they connect and that adds some character to the era. All those people who have watched Zakhm will be able to join the dots here. Fact Check: This Video of Mahesh Bhatt Losing His Cool and Lashing Out Is Not From Sadak 2 Event, Here's The Truth Behind This Viral Video on Twitter .

Performances are decent. Tahir should have dropped that hideous wig to be Bhatt. Otherwise he does a fairly good job. He never lets his control on the character slip. Amala Paul could have done so much more had the character not being so chronically one-dimensional. In fact, her entire anxiety episode is reduced to a voice over with Tahir in the visuals. That's an injustice to the character and the person playing it. She shines in every frame. The fears and insecurities of Amna needed to be seen and felt. Amrita Puri as Shankar's wife Anju is decent but deserves much more screen time. Zubair played by Rajat Kaul is reminiscent of Kabir Bedi and the actor does a good job at it.

Ranjish Hi Sahi doesn't shed any new light to the doomed relationship of Bhatt and Babi but can be worth a watch to see the Bombay of that era. Ranjish Hi Sahi streams on Voot Select.

(The above story first appeared on LatestLY on Jan 12, 2022 11:04 PM IST. For more news and updates on politics, world, sports, entertainment and lifestyle, log on to our website latestly.com).