Shehnaaz Gill's father Santokh Singh Sukh, was booked for raping a woman at gunpoint. While the incident in question took place on May 14, 2020, the victim came forward and lodged an FIR only on May 19, 2020. 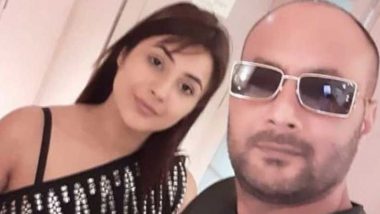 Bigg Boss 13 contestant Shehnaaz Gill has lately been in the news for an issue that, for a change, has nothing to do with Sidharth Shukla. The Punjabi starlet's father Santokh Singh Sukh, who also became a celeb of sorts when he entered Bigg Boss 13 as a part of the show's family task was booked for raping a woman at gunpoint. While the incident in question took place on May 14, 2020, the victim came forward and lodged an FIR only on May 19, 2020. Bigg Boss 13 Contestant Shehnaaz Gill's Father Santokh Singh Sukh Accused of Raping Woman at Gun Point, FIR Filed Against Accused Who is Absconding.

In an interview with an entertainment portal, Shehnaaz's brother Shehbaz Gill had rubbished the rumours and said that the lady was simply trying to target his father and defame him. Shehbaz also went on to say that they had arranged for CCTV footage of the place where the victim was alleging she was raped. Shehbaz Gill On Father Santokh Singh Sukh's Rape Case: 'The Lady Is Lying, My Father is Not Wrong and Justice Will Be Served Soon'.

And now, Santokh Singh Sukh, who has reportedly been absconding since the alleged incident took place, spoke to a Punjabi news channel over the phone. The excerpts of Santokh Singh's interview with a news channel, have been circulating on Twitter.

Check Out The Videos Below:

In the video, Santokh told the news channel that the victim knew Lucky, his friend who was staying at his house Sukh Pradhan, where she had come by with a friend wanting to speak to Lucky.

As per Santokh's version, when he told the lady that he did not want to meddle between her and Lucky's personal matters, the lady went away but not before threatening to create a scene.

Santokh also revealed in his phone conversation that CCTV footage proves he did not step out of the house on the day of the alleged incident.

Santokh also revealed that the lady works at a local court where she illegally removes Names from FIRs and takes money in exchange for her favours. In fact, he also claimed that this (rape case) was a ploy on her behalf to garner publicity and extort money from him.

This Twitter user also shared a translated Hindi version of the whole chat.

As per the FIR registered under sections 376, 606 of IPC . The victim claimed that Santokh,  on the pretext of taking her to meet her boyfriend, drove her to the Rohi Bridge and raped her at gunpoint. She also alleged that he threatened to have her killed if she told anyone about the incident.

(The above story first appeared on LatestLY on May 22, 2020 08:43 AM IST. For more news and updates on politics, world, sports, entertainment and lifestyle, log on to our website latestly.com).