Shehbaz Gill On Father Santokh Singh Sukh's Rape Case: 'The Lady Is Lying, My Father is Not Wrong and Justice Will Be Served Soon'

Santokh Singh Sukh's son and Shehnaaz Gill's brother Shehbaz Gill has rubbished these allegations. In a conversation with the media and has said that the lady is trying to defame his father. 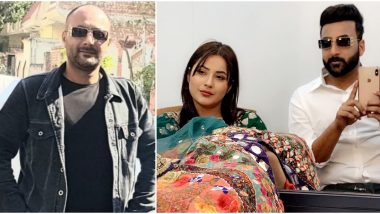 In her complaint, the victim had alleged that she had gone to Santokh's house where she was supposed to meet her boyfriend, when on the pretext of driving her to her boyfriend, Santokh took her to Rohi Bridge and raped her. Santokh Singh Sukh is reportedly absconding. Mahira Sharma To Approach The Cyber Crime Cell Over Shehnaaz Gill's Fans Trolling Her, Says 'No Contestant’s Fans Have Done That So Far'.

However, Santokh's son and Shehnaaz Gill's brother Shehbaz Gill has rubbished these allegations. In a conversation with SpotboyE, Shehbaz revealed, "Yes, there has been a case registered with the Punjab police but these are completely false allegations. The lady in question is trying to defame my father."

He continued, "We are surely disturbed at the moment but we also know nothing is going to happen as we have enough proofs that the lady is lying. The mentioned place where the incident according to her happened is under CCTV surveillance and we have arranged for the recording of it."

He also revealed that he does not know the victim at all. "I really don't know her as Shehnaaz and I have shifted to Mumbai from quite some time now. But all what we know is my father is not wrong and justice will be served to him soon."

When quizzed if he and Shehnaaz will return to Punjab to be by their family's side, Shehbaz said, "For now, we are very much in Mumbai and don't have any such plans. I am busy with calls since morning and I would like media to cooperate with us."

(The above story first appeared on LatestLY on May 21, 2020 03:54 PM IST. For more news and updates on politics, world, sports, entertainment and lifestyle, log on to our website latestly.com).