Squid Game, a dystopian Korean drama series, has become the most-watched Netflix content of all time with more than 1.65 billion hours of viewing in the first four weeks after its release in September, reports Yonhap News Agency. 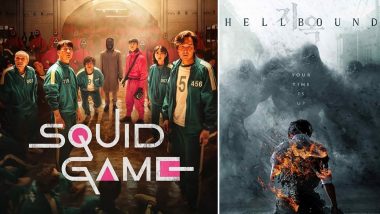 From the dramas Squid Game and Hellbound to superband BTS, South Korean pop culture drew fans from all over the world throughout 2021, raising hopes about what is in store in the coming year. Squid Game, a dystopian Korean drama series, has become the most-watched Netflix content of all time with more than 1.65 billion hours of viewing in the first four weeks after its release in September, reports Yonhap News Agency. Year Ender 2021: From WandaVision, Squid Game to Hawkeye; Five Breakout Shows Of This Year That You Should Definitely Watch!

The nine-part series is about contestants competing in deadly Korean children's playground games to win 45.6 billion won ($38.5 million) in prize money. The show's popularity made its costumes -- green tracksuits and black masks -- a fashion hit for Halloween in many countries around the world last month. On TikTok, a short video social media platform that is used by mostly teenagers, videos of people playing children's games that appeared in the series have been spreading rapidly. BTS V aka Kim Taehyung Shares SEXY AF Stills in Squid Game Costume, Will Make Your Ovaries Explode!

And then Hellbound, a new South Korean fantasy horror series from Netflix, overtook Squid Game as the most-watched TV show on the streaming platform, one day after its release last month. Hellbound, which depicts social turmoil and unrest after a series of inexplicable supernatural phenomena, sat atop the service's global chart of its 10 most popular TV programmes for 10 non-consecutive weeks, until it slipped off the list this past Thursday. But three Korean dramas were on the chart -- 'Squid Game' at No. 6, KBS's historical romance 'The King's Affection' at No. 7 and the tvN romance 'Hometown Cha Cha Cha' at No. 9 that day.

In the K-pop industry, BTS continued its record-shattering run this year as its second English-language single 'Butter' stayed for 10 non-consecutive weeks on the 'Billboard Hot 100'. The South Korean boy group followed it up with two other chart-toppers, 'Permission to Dance' and 'My Universe', a collaborative single with British rock band Coldplay.

The septet snatched four awards at the annual Billboard Music Awards and three at the American Music Awards (AMAs), and was nominated in the best pop duo or group performance category of the Grammy Awards for the second consecutive year. During the AMAs held last month, in particular, BTS became the first Asian act to win the top honour of Artiste of the Year.

The K-pop giant had four sold-out concerts at SoFi Stadium in Los Angeles, where more than 200,000 American fans gathered across four nights between November 27 and December 1, despite the Covid-19 pandemic. Yonhap quoted experts as saying that these phenomenal successes once again proved that Korean pop culture is now firmly rooted in the global entertainment market that has been dominated by the United States for nearly a century.

"In the past, the Korean Wave was just a regional phenomenon in some geographically and culturally adjacent Asian countries," Kim Young-dae, a music critic, said in a radio programme. "But now, it is a global phenomenon happening with no particular pattern and in countries with no similar culture backgrounds, like the United States, Kazakhstan and Indonesia."

Noting that a total of 13 albums from other K-pop groups, such as BLACKPINK, TWICE, Seventeen, Enhyphen, ITZY, NCT 127, Tomorrow X Together and Monsta X, made it to the Billboard 200 main albums chart with some reaching high rankings this year, Kim said these achievements show there has been a fundamental change in the West's perception of South Korean culture in recent years.

"Westerners obviously had stereotypes or prejudices about Asians, and from that point of view, they consumed foreign content in the past. They thought like foreign content is fun, but very exotic or eccentric," he said, citing Psy's 2012 worldwide hit 'Gangnam Style' as an example.

But things have changed in the recent three to four years to a point where K-pop idol groups are considered to be a new standard of aesthetics or modernity, he pointed out.

(The above story first appeared on LatestLY on Dec 20, 2021 09:40 AM IST. For more news and updates on politics, world, sports, entertainment and lifestyle, log on to our website latestly.com).