One of my New Year resolutions for 2022 was to cut down on social media time, and it did not seem like a tough ask, especially since browsing the same apps had become a tad-bit tiring. But life or should I say BTS (Bangtan Boys), the biggest boy band on the planet right now, had other plans. The septet launched their individual Instagram accounts, and life has never been the same again. Especially, V, aka Kim Taehyung, who seems to be on a roll. He is busy breaking Instagram records, making goofy accidental mistakes and sharing thirst traps. In his now-deleted Instagram post, Kim Taehyung had shared a couple of stills from his BTS Permission To Dance on Stage (PTD on Stage) LA concert, where he bowled over his fans donning a Squid Game guard costume. While the reason behind deleting the post remains unknown, Tae Bear posted a couple of snaps from the same day on his IG story. Oh boy, Tae Tae looks SEXY AF. Ovary explosion is happening, guys! BTS V aka Kim Taehyung SMASHES Instagram Records, Excited ARMY Says, ‘Everyone’s a Gangsta Until the Real Gangster Arrives’.

Often dubbed as the ‘social butterfly’ of the music group, BTS’ V has gotten further busy, making every ARMY member’s heart flutter with joy since joining Instagram. In his birthday month (born on December 30, 1995), Tae Bear is presenting gifts to his fans and supporters. His most recent post on Facebook-owned definitely got the temperatures soaring. V posted a couple of photos from the group’s ‘PTD On Stage’ performance in LA on Day 3, where the 25-year-old wore an all-red outfit and black mask resembling killer guards from Netflix’s hit drama series, Squid Game. V is seen wearing a Squid Game face mask with the square symbol, and in the next, he removes it to show his handsome face. “Our Beloved Summer” crooner had captioned the images with an octopus emoji (yes, it should have been a squid emoji, but we adore the mixup, don’t we). Interestingly, he posted the correct squid emoji on IG Stories. 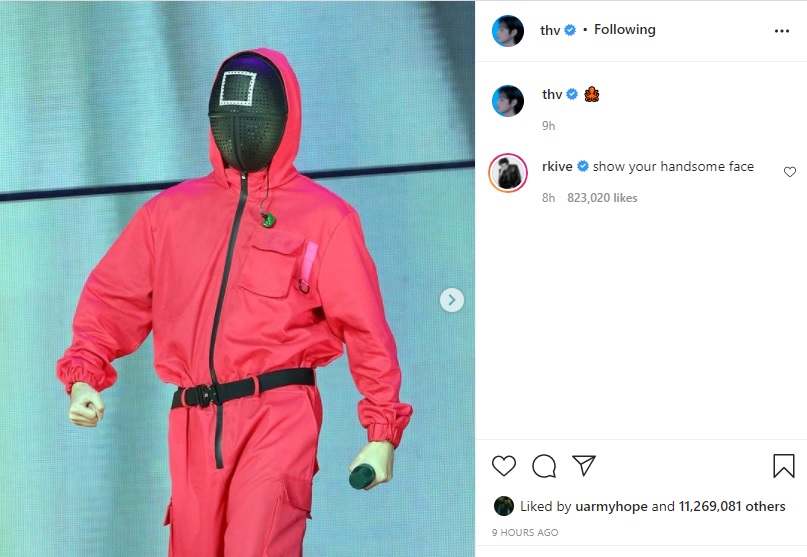 HoYeon Jung and Netflix Korea Had Liked The Post As Well

V’s post had caught BTS leader and rapper, RM aka Kim Namjoon’s attention as he dropped a comment, writing: “show your handsome face.” Another band member J-Hope aka Jung Ho-seok, too liked the post. However, Squid Game actress HoYeon Jung got Twitterverse buzzing after she dropped a like on Kim Taehyung’s pictures. Netflix Korea, too liked the post.

This is What Netflix Had Tweeted Seeing V in Squid Game Costume:

While V should never really wear a mask, I am living for this BTS x Squid Game mashup

Earlier, Kim Taehyung’s Squid Game act during the band’s stage show had gone crazy viral online. The South Korean vocalist broke the internet with his getup, his groovy dance moves, his to-die-for smouldering hot facial expressions. He drew attractions from far and wide. In fact, Netflix could not help but tweet, “While V should never really wear a mask, I am living for this BTS x Squid Game mashup.” Same, Netflix, Same.

(The above story first appeared on LatestLY on Dec 08, 2021 12:38 PM IST. For more news and updates on politics, world, sports, entertainment and lifestyle, log on to our website latestly.com).