On World Television Day, check out the Television shows from the 90s that aired on Doordarshan and made our childhood a happy place. 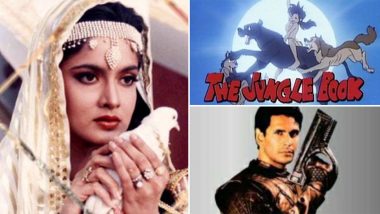 Today is World Television Day and since Indian Television today is a joke, we thought we will talk about the good old days of Doordarshan when television was the best thing to have happened to us. Given the fact that it was the only channel airing shows, we have been fortunate enough to watch a plethora of shows that were simply fantastic. If there was Discovery Of India narrating the many tales of India, there was also The Jungle Book making every kid a Mowgli. Shaktiman will always be our first and favourite Indian superhero. The best bit was the channel had something for everyone. If the Sunday mornings were for kids, shows like Shanti and Swabhimaan catered to the adults. That's what made the 90s one of the best times for Indian Television which will never return because the audience today loves to watch mediocrity. World Television Day 2020 Facts: Interesting Things to Know About TV And It’s Journey Over the Years

So let's take a trip down memory lane and tell you why once upon a time Doordarshan was a dream!

We still remember the title track of the film. It was essentially a love story between two people residing in warring kingdoms and a lot of supernatural elements. Irrfan Khan too played a significant role in this show which unfortunately went haywire towards the end. It was our introduction to all things mystical and fantasy. Yakku!

Do we even have to spell out why this show was legendary? Many of you might have watched it recently on Doordarshan thanks to the lockdown. For us, PI meant Byomkesh Bakshi for the larger part of the 90s and 2000s. It was precise, imaginative and a very intelligent show.

All of us kids from the 90s are still in love with the TV adaptation of the short story collection of R K Lakshman called Malgudi Days. It was fun, informative and taught a lot of life lessons that we could grasp even as kids.

If Hollywood had Star Wars, we had Captain Vyom! A series based on outer space, it was such a woke idea at that time. It only helped that show had a very dishy Milind Soman as the Captain!

Jaspal Bhatti doing what he does best - leave us in splits. His deadpan way of delivering gags was a riot. Every episode had a new theme and most of them used to stem out from the current political scenario. The best comedy series India has ever produced.

When on comedy, we have to talk about this family which was simply hilarious. The dynamics between the members of this joint family gave rise to many funny moments. World Television Day Special: Ridiculous Scenes From Indian Soaps That Would Make You Want to Switch Off the TV!

Renuka Shahane and Siddharth Kak were our GK teachers. The graphic representation at the start of the show is still fresh in our minds. We have learned more about India of those days from this show than from any textbooks.

Simplifying complex laws of Physics with regular day material made this show a fantastic addition to the list.

Not many are aware of this investigative thriller with Shekhar Suman in the lead but we assure it's one of the most amazing shows on television then. The forever broke Suman breaks news and turns tables.

Who has watched this show? Not many we are sure. A foreign return man is on a bride hunt which leads to comic moments. It's such a refreshing way of presenting the hunt with Om Puri's voice-over taking a dig at the protagonist played by Mohan Gokhle.

There are obviously mythological shows like Ramayan and Mahabharat and also Buniyaad, Hum Log and Nukkad, but if we sit to talk about all, one day will be too less to celebrate the biggest influence of our childhood - Doordarshan.

(The above story first appeared on LatestLY on Nov 21, 2020 08:15 AM IST. For more news and updates on politics, world, sports, entertainment and lifestyle, log on to our website latestly.com).