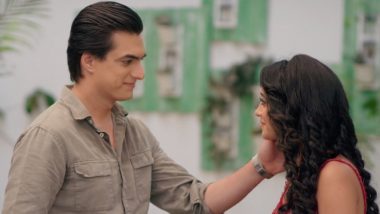 Today’s episode of Yeh Rishta Kya Kehlata Hai starts with Naira (Shivangi Joshi) trying Mihir’s number as she thinks he might be angry but he tells her do to some work and behaves normal. There all are enjoying Krish’s “Aanaa Prashan”,just then Naira gets a call and she goes to attend it. Later, Naira calls the shop and enquire whether the gifts are dispatched which she had ordered and had they wrote Kartik’s (Mohsin Khan) and her name in it, they say they have written it. Naira thinks Kartik will be happy and surprise to see the gift. Yeh Rishta Kya Kehlata Hai May 17, 2019 Written Update Full Episode: Kartik and Naira’s Marriage Hits Troubled Waters As Suhasini Tries to Intervene in Their Work

There Kartik seeing Naira busy in her work, gets disturbed as why Mihir has given her so much work as she cannot enjoy the function also. Just then Naira hears some guests talking regarding her working to Suhasini and telling her to be little conscious as this may disturb their family life, Swarna comes and tells Naira not to worry because of this talks. Naira goes upstairs to work as no one can disturb her. Mihir video calls to show her some designs, just then Kartik comes and hugs her, she tells Kartik to go now and that she will join him later when her work is done. Yeh Rishta Kya Kehlata Hai Fame Mohsin Khan Jumps Into Political Hoopla, Campaigns for TMC Candidate Sajda Ahmed

Down the functions starts, Naira also comes down and sees her gift has come and tells them to keep it in the side. Naira keeps her phone on one side and holds Krish and enjoys the function, just then Mihir’s call come, Kartik picks up the phone and tells that Naira is busy now and that she will call him later, Mihir tells that how come he got well so soon as he is attending the function and tells if they don’t like the female of the house to work then why let them out, Kartik gets angry and keeps the phone.

There in the gift which Naira has ordered they put two cards, in one card they put Kartik’s name and in other they had put Naira’s name, suddenly the card in which Kartik’s name is there fells down. Naira tells Luv and Kush to get the gift so that she and Kartik can give it to Krish. When the gift is opened all are happy to see it, one of the guests see the card in which Naira is written and tells that will Krish get two gift one from Naira and from Kartik. The guest say that as Naira is earning now she got the gift from her side and what will Kartik give now. Suhasini gets angry and thinks Naira has done it purposely. Kartik gets upset and goes out, Naira follows him. Yeh Rishta Kya Kehlata Hai Fame Karan Mehra Makes His TV Comeback With Shrenu Parikh’s Ek Bhram Sarvagun Sampanna

Suhasini comes and tells Naira that she has done wrong but Kartik comes and tell that he is not angry and that he just went out to get an envelope so that he can give it to Krish and tells it is Naira’s wish what she wants to give as it is her money. Swarna and Manish also come and tells that they should forget everything and enjoy the function so that people won’t start talking about this and take them inside to attend the function. In the precap, Akhilesh gets a call and comes to know that their jewellery which was coming in a car is stolen and panics what will happen now.

(The above story first appeared on LatestLY on May 20, 2019 03:17 PM IST. For more news and updates on politics, world, sports, entertainment and lifestyle, log on to our website latestly.com).