Your Honor Review: Jimmy Sheirgill’s Web-Series Is Intriguing but Suffers From a Passable Execution 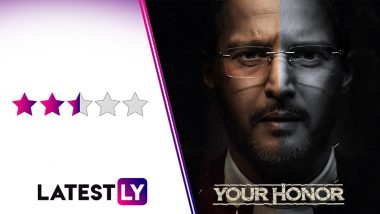 Your Honor Series Review: After Rangbaaz Phir Se, Bollywood star Jimmy Sheirgill makes his presence felt in the OTT world for the second time with the web-series, Your Honor. A remake of an acclaimed Israeli mini-series, Kvodo (that has also inspired an upcoming American series, starring Bryan Cranston), Your Honor is streaming on SonyLiv from June 18. Jimmy Sheirgill plays Bishan Khosla, a district sessions judge, who faces an unexpected, dark predicament that makes him work against his own ethics. Jimmy Sheirgill to Make His Digital Debut with ‘Your Honor’, An Official Adaptation of Israeli Series ‘Kvodo’.

The show begins with an accident on the Jalandhar-Ludhiana highway, when a car rams against a bike, leaving the biker seriously injured. The driver of the car, Abeer (Pulkit Makol) happens to be the teenage son of Bishan Khosla. Bishan, who is about to be a High Court judge, now has to make sure both his son's freedom and his reputation are not in tatters.

Things get further complicated when the biker's identity is revealed to be the son of a dreaded criminal, whom Bishan had sent to jail. It also didn't help that the police arrest a young thief Guddan (Paras Gupta), who was tasked to dispose off the car by Bishan's friend Kashi (Varun Badola), a CRPF officer, after Bishan files a theft report. There are also other main characters who are being thorns in Bishan's side. Like the cop Kiran Shekhan (Mita Vashisht) who is investigating the case. And Ruma (Parul Gulati), Bishan's former protege and budding lawyer who is now defending Guddan.

With troubles piling up for him and his morose son going further in shell, Bishan now has to circumnavigate the same laws he had sworn to uphold.

Watch The Trailer of Your Honor:

Your Honor is directed by E Niwas, who is known the best for his directorial debut, Shool, starring Manoj Bajpayee and Raveena Tandon. Considering he can make engaging social thrillers, like his underrated debut, we were very curious to see how Niwas works around with Kvodo's premise. Fair points first, the director does a good job of convincingly placing the setting in Punjabi-Haryana belt with flavours of Bihar.

Like with most of the web-series these days, Your Honor indulges in the greys of its lead character, an upright man who goes to any lengths to save his son. Or his reputation. With only four episodes sent for review purposes (out of twelve), it is difficult to judge what exactly is Bishan trying to the protect the most. His dilemma reminded me of the protagonist of Drishyam - both are willing to go to any extreme to cover a crime  to save their family. Your Honor Trailer: Jimmy Sheirgill and Varun Badola's Crime Thriller Looks Engrossing (Watch Video).

What sets them apart is that Bishan has privilege and power on his side, that protects him as his talisman. He is also not thinking ahead, but taking the spur-of-the-moment decisions, that end up often malicious to others. He is a Walter White in a judge's robes, except he is Punjabi and doesn't have cancer as an excuse for his wrongdoings. It is an interesting role for sure, that would be more so in the episodes ahead, and despite his boyish charm poking its head out, Jimmy does good with the role. Even though, on occasions, he underplays the character a bit too much.

Another fascinating character is that of the cop. Mita Vashisht is fabulous as the no-nonsense officer, the Jhansi ki Rani in her department. There are hints of sexism and even caste discrimination in how the characters behave around her, which makes Kiran Shekhan an intriguing adversary to Bishan. Some of the series' more thrilling moments often lie in the conversations between these two.

While it has some good, and occasionally smart character moments, Your Honour's passable execution and flat tone often becomes a hindrance. But nothing feels more so that Bishan's troubled relationship with his son. We can see Abeer's internal turmoil bubbling under his disturbed exterior, but the character comes across as very distant, not to his father, but even to the audience. It also doesn't help that the actor is playing the role in a monotonous note. Instead, the scenes between Guddan and Ruma have more engagement.

Taking a page out of Sacred Games, and Paatal Lok, Your Honor also take excursions to our diversified communities, in this case, the Bhaiyyas and Jats, though the layering isn't that thick enough. Even the angle of the accident victim's criminal family lacks the depth to be thrilling and scary.

Your Honor benefits from its morally ambiguous characters and its borrowed storyline, efficiently adapted in the privileged, casteist setting. It is its flat tone and its treatment of a major character, that often takes away the sheen from the saga. Your Honor is streaming on SonyLIV.

(The above story first appeared on LatestLY on Jun 18, 2020 09:57 AM IST. For more news and updates on politics, world, sports, entertainment and lifestyle, log on to our website latestly.com).