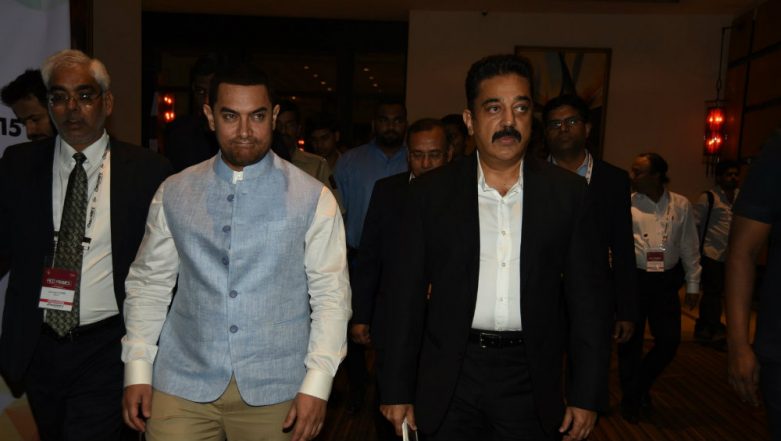 Kamal Haasan's fans are already lauding their icon, thanks to the blockbuster trailer of Vishwaroopam 2. The fans were waiting for the second installment of Vishwaroopam since a long time and they are truly happy that their patience did not go waste. Of course, the fans are happy about how the mass entertainer has shaped up but there is one more reason to be happy for them! The superstars of two mega industries, Aamir Khan and Haasan have buried their hatchets and are bonding over the film like bros! Apart from the fact that the PK actor himself was present at the trailer launch of Vishwaroopam 2, they are also lending support to each other on social media.

The Dangal star tweeted, " Dear Kamal Sir, congratulations to you and to the entire team of Vishwaroop 2 ! Wishing you all the very best. Love and respect always. Aamir.#Vishwaroop2Trailer @ikamalhaasan." On this, the  Sadma actor promptly replied, "Thank you @aamir_khan Ji, The team thanks you too. In a way, by your graciousness in releasing our trailer we feel you are in our team too."

Thank you @aamir_khan Ji, The team thanks you too. In a way, by your graciousness in releasing our trailer we feel you are in our team too. https://t.co/mG6zkSZqwS

If you are wondering on why is everyone pleasantly surprised by this bonding then let us remind you that Kamal was not much appreciative of Mr Khan earlier. It all started when the South star was roped in to host the Tamil version of Bigg Boss show. When he was asked about why he did not choose a show like 'Satyamev Jayate' as host Aamir Khan did, he rather gave a stern answer. All he said was, " I have been more socially responsible for long than the person who hosted 'Satyamev Jayate'." Now that both have kept the bitterness aside, we hope that the movie shatters the box office too!