The Indian Air Force (IAF) also known as "Bharatiya Vayu Sena" is celebrating its 88th founding day on Thursday, October 5. The IAF was established on October 8, 1932, by the Britishers. To commemorate the day, Air Force Day is celebrated every year. Air Force Dat 2020 Will mark the 88th anniversary of the IAF. 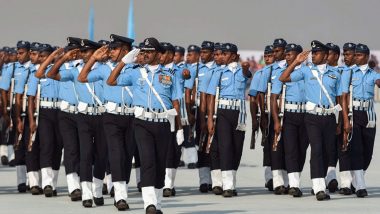 During the Air Force Day parade, an airshow is held, in which the force exhibits its aircraft, including aerobatics demonstrations by fighter jets. Vintage aircraft are also displayed in the parade. IAF's skydiving team -- Akash Ganga-- performs scintillating aerial acrobats during the event. Air Force Day: Facts About the Indian Air Force.

The four-star officer with the rank of Air Chief Marshal leads the force, while Marshal of the Indian Air Force (MIAF) rank is an honorary five-star rank conferred by President of India for exceptional service. Arjan Singh was the only Marshal of the Air Indian Air Force. Air Marshal Subroto Mukherjee was the first Chief of Air Staff of the IAF.

This year also, the parade will be held at Hindon Airbase in Uttar Pradesh's Ghaziabad. The ceremony will start at 8 am and will continue till 11 am. This year, newly inducted Rafale fighter jets would feature in the Air Force Day parade 2020. The other aircraft participating in the parade are - Sukhoi Su-30 MKI, LCA Tejas, AH-64E Apache helicopters, CH-47F (I) Chinook, ALH Rudra, C-130J "Super Hercules", C-17 "Globemaster" and Mi-35.

(The above story first appeared on LatestLY on Oct 08, 2020 07:00 AM IST. For more news and updates on politics, world, sports, entertainment and lifestyle, log on to our website latestly.com).