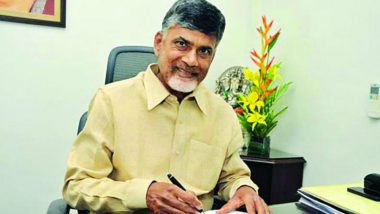 Vijayawada, June 16: Andhra Pradesh Chief Minister N. Chandrababu Naidu on Saturday joined Muslims in offering Eid-ul-Fitr prayers. Wearing a skull cap, he stood with Muslims to offer Eid 'namaz' at Municipal Grounds in Vijayawada.  He greeted Muslim leaders and commoners on the occasion of Eid, which marks the culmination of a holy month of Ramadan.

Addressing the gathering later, he conveyed his greetings to the Muslims in Urdu. He said Muslims observed the fast during the month for the well-being of the mankind. Naidu said he prayed to the Almighty Allah for all help to the state and for the prosperity and happiness of the people.

He said the Telugu Desam Party (TDP) government was giving top priority to maintaining communal harmony in the state. He recalled that TDP was the first party to oppose triple talaq bill.

Naidu said Rs 1,100 crore was allocated in the state budget for the welfare of minorities. He claimed that Andhra Pradesh is the only state paying an honorarium to 'imams' and 'muezzin' of the mosques. He announced that 25 residential schools for minorities would be opened soon in the state.

Meanwhile, Muslims across Andhra Pradesh celebrated Eid with gaiety. Clad in new clothes, they offered prayers in the morning at Eidgahs and mosques. Large congregations were also seen in towns like Guntur, Nellore, Anantapur, Kadapa and Kurnool.

(The above story first appeared on LatestLY on Jun 16, 2018 12:41 PM IST. For more news and updates on politics, world, sports, entertainment and lifestyle, log on to our website latestly.com).