The Delhi High Court on Monday directed the Drug Controller of Delhi to examine the procurement and distribution of FabiFlu by BJP MP Gautam Gambhir, and to take necessary action as per law. 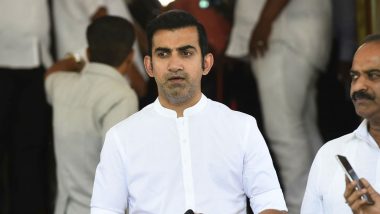 New Delhi, May 24: The Delhi High Court on Monday directed the Drug Controller of Delhi to examine the procurement and distribution of FabiFlu by BJP MP Gautam Gambhir, and to take necessary action as per law.

A division bench of Justice Vipin Sanghi and Jasmeet Singh said Gambhir has been a cricketer who played for India. "we are sure he had good intentions..... the way he has gone about it, he has actually done a disservice, unintentionally may be. This is not done." The bench took note that FabiFlu was in short supply at the time when the drug was being distributed by Gambhir. Delhi High Court Asks Drug Controller to Inquire into BJP MP Gautam Gambhir, Other Politicians Buying COVID-19 Medicines in Bulk

The bench added that it is sure Gambhir had best intentions and he also started a charity and if he wanted to help maybe he could have provided funds. The bench added, is it a responsible behaviour to bulk purchase medicines when you know there is a shortage?

The High Court also took note of the AAP MLAs Preeti Tomar and Praveen Kumar's procurement of oxygen cylinders and directed an inquiry must be done by the drug authority. The court emphasised that the law must take its course.

"Intentions may be lacking but, in that process, if they cross the line, law has to take its course. Even with best intention, they are malpractices", the court noted.

The bench added that it has narrowed down on three: Gambhir, Tomar and Kumar.

The court noted in Gambhir's case, FabiFlu left after distribution, were given to the Directorate General of Health Services (DGHS). The court has sought report from Delhi's drug controller, detailing on the quantity of FabiFlu procured on the basis of a single prescription and then distributed to several patients/attendants.

The court told the drug controller that a very clear case and it should find out against whom action is required to be taken. However, the court clarified that it has not directed that "any action be taken" against Gambhir or the two MLAs.

The High Court was hearing a plea seeking registration of FIRs against political leaders involved in hoarding and illegally distributing COVID-19 medicines, which led to denial of these medicines to common people.

The court directed the police to hand over the material collected during the investigation to the drug controller. Earlier, the court had Delhi Police to file its status report on such incidents of hoarding in the national capital. The court has posted the matter for further hearing on May 31.

(The above story first appeared on LatestLY on May 24, 2021 05:21 PM IST. For more news and updates on politics, world, sports, entertainment and lifestyle, log on to our website latestly.com).