Delhi Riots Case: SC Refuses to Stay Bail Granted to 3 Activists But Expresses Dissatisfaction Over HC Verdict, Says Judgment Should Not Be Treated as Precedent

The Supreme Court on Friday expressed dissatisfaction with the Delhi High Court 100-page judgment granting bail to one of the three student-activists accused in a case of "larger conspiracy" related to the February 2020 northeast Delhi riots, which claimed lives of 53 people and left hundreds injured. 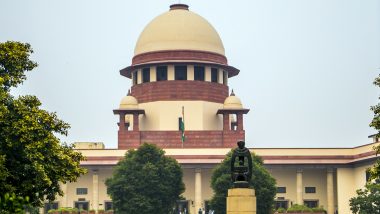 New Delhi, June 18: The Supreme Court on Friday expressed dissatisfaction with the Delhi High Court 100-page judgment granting bail to one of the three student-activists accused in a case of "larger conspiracy" related to the February 2020 northeast Delhi riots, which claimed lives of 53 people and left hundreds injured.

A bench comprising Justices Hemant Gupta and V. Ramasubramanian, pointing at the 100-page judgment delivered by High Court while granting bail to Asif Iqbal Tanha, observed, "In the 100-page bail judgment; discussing all law. This is what is troubling us. We may stay the effect of this order, people (the three activists who were released recently) may not go behind the bars."  Delhi Riots Case: Delhi Police Moves Supreme Court Challenging HC Bail to Activists Asif Iqbal Tanha, Devangana Kalita and Natasha Narwal

The bench emphasized that the High Court judgment may have wide ramifications and hence, the top court will have to examine it, and favoured staying the effect of the judgment so that it can't be used as a precedent in any other case for the time being. "The issue is important and could have pan India impact, we like to issue notice", said the bench.

The bench said: "We will not stay the High Court judgment. But it cannot be cited as precedent by any accused in Delhi riot case to seek bail."

Solicitor General Tushar Mehta, appearing for the police, contended that the High Court made wide ranging observations and the judgment should be stayed by the top court. "They (the three activists arrested under UAPA) are out. Let them remain out", submitted Mehta.

Mehta stressed that the entire UAPA and Constitution have been turned on their heads by the High Court in the judgement.

Senior advocate Kapil Sibal, appearing for the student activists, submitted that he doesn't oppose a scrutiny by the top court of the High Court order, but resisted a stay on the operation of the judgment. Mehta said the High Court order will be cited before the trial court; therefore, it requires a stay.

The top court said the way the Delhi High Court has interpreted UAPA, when it was not even requested to do so, requires it to examine the issues raised by the Delhi Police.

After hearing arguments, the top court issued notices on the appeals filed by the Delhi Police challenging the High Court decision to grant bail to three student-activists Natasha Narwal, Devangana Kalita and Asif Iqbal Tanha. The top court directed that the Delhi High Court orders on bail won't be treated as a precedent and won't be relied upon by any parties before any court. The top court also declined to interfere with the release of three accused in the matter.

All three were given bail Tuesday on personal bonds of Rs 50,000 each and two sureties of a similar amount. The other conditions for their release included the surrender of their passports. A Delhi court on Thursday ordered release of three activists.

The top court will hear the matter in the week commencing from July 19.

(The above story first appeared on LatestLY on Jun 18, 2021 03:22 PM IST. For more news and updates on politics, world, sports, entertainment and lifestyle, log on to our website latestly.com).