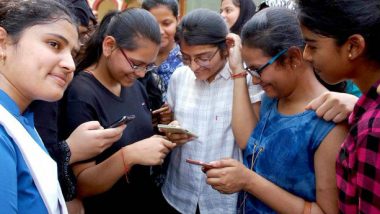 New Delhi, July 30: Maintaining the previous trend, girls outshone boys in CBSE class 12 exams this year by a margin of 0.54 percent, while over 70,000 students scored above 95 percent marks. The results were declared by the Central Board of Secondary Education (CBSE) on Friday.

"Girls have done better than boys by 0.54 percent. The pass percentage this year is 99.37 percent. No merit list has been announced," a senior board official said.

The result for over 65,000 candidates is still being prepared and will be declared by August 5. A total of 70,004 students have scored above 95 per cent marks while 1,50,152 students have cored above 90 per cent. CBSE Class XII Result 2021 Declared, Pass Percentage at 99.37%; Students Can Check Class 12 Marks at cbseresults.nic.in and cbse.gov.in.

As many as "6149 students have been placed in compartment," the official said. The board exams were cancelled this year in view of the aggressive second wave of COVID-19, and the result will be announced on basis of an alternate assessment policy by the board.