Chennai up in Protest Over Ongoing Cauvery Issue: The What and Why Of Water Sharing Dispute Which is Holding up IPL 2018

IPL Chairman Rajeev Shukla clarified that home matches of the Chennai Super Kings will go on as per schedule and adequate security will be provided for the matches. 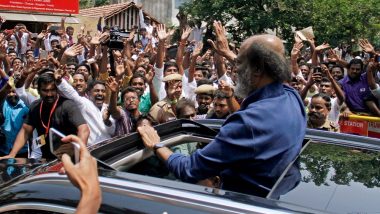 Rajinikanth on Sunday addressed a demonstration which slammed the conduct of IPL amid the Cauvery water crisis. (Photo Credits: PTI)

After a hiatus of two years the dynamic Chennai Super Kings have made their return to the IPL leaving behind all the controversies but it seems the joy is short lived. A massive row in home state Tamil Nadu over the Cauvery issue has united the political parties who are slamming the conduct of matches of CSK in Chennai amidst the protest which as per parties is the single most important agenda of all Tamilans. Superstar Rajinikanth while speaking to the reporters conveyed his displeasure with Centre delaying the setting up of the Cauvery Management Board and warned about the possible backlash that awaits the government in Tamil Nadu. He was particularly critical of the scheduled IPL matches in the state and wanted the cricketers to support the issue by wearing black armbands.

What is the Cauvery dispute?

River Cauvery in south India is a bone of contention between two states Karnataka and Tamil Nadu since the pre independence days when the Madras Presidency and Kingdom of Mysore got into an agreement deciding the flow of Cauvery water in their respective areas. As per the historic records, close to 75 percent of the water was to go to Tamil Nadu with only 23 percent available for Karnataka. But with advent of time, Karnataka became more vociferous and wanted the age old agreements which it believed was done in order to provide undue advantage to Madras Province by the British government. In the year 1974, with 50 years of the 1924 pact between the two British age presidencies coming to an end Karnataka asked for greater share of Cauvery water as it said it will no longer give the decided share to Tamil Nadu. The Tamil Nadu reacted sharply to the idea of Karnataka developing a dam on river Cauvery

Now the issue with for Tamil Nadu was that it had developed millions of land for agriculture purpose and any change in water usage pattern would have hit them hard. While Karnataka had its own ambitions and in drought years where in water level in Cauvery was not much, it found the water which emerged on its land and flowed through a major part difficult to share it with Tamil Nadu as per the old pacts. The year 1990 saw the two states in the Supreme-court and with no ready to budge a tribunal was setup. The tribunal on calculating the average inflows in the state asked the Karnataka government to keep 205 tmcft of water for Tamil Nadu which in subsequent it defaulted on.

Finally after 16 years of political drama and protests that often turned violent, the tribunal came up with a final verdict. The verdict held valid the British era agreements of 1892 and 1924 and Karnataka had to keep 270 TMC of Cauvery water for it while allowing Tamil Nadu to have 419 TMC of it with Kerala and Pondicherry getting 37 TMC of the river water. The Central Government was given the task to set up the Cauvery Management Board (CMB) and it is this failure that has been pulled up by the Supreme Court and has angered the Tamil parties.

Future of IPL matches in Chennai

IPL Chairman Rajeev Shukla has made it clear that the home matches of the Chennai Super Kings will go on as per schedule and adequate security will be provided for the matches. The issue clearly looks like another example of sports being targeted in the name of politics. CSK CEO K S Viswanathan informed the city police about the recent developments and was assured of all support. The Kerala Cricket Association has stepped in to with Kochi and Trivandrum as backup locations in an event of the matches being impossible to conduct because of the history of Tamil parties and its violent protest where things escalate quickly. Although the Greenfield Stadium of Trivandrum looks the more likely to be ready case Kerala is asked to hold matches.

The present situation in Tamil Nadu is indeed worrisome and it may not be the right time for IPL when emotions are so high in a state whose economy is getting punctured by murky dispute. Well for the fans and the neutrals, Chennai missing out on IPL will not be a good news as the stadium holds a special place in the heart of millions of CSK fans.

(The above story first appeared on LatestLY on Apr 09, 2018 08:08 PM IST. For more news and updates on politics, world, sports, entertainment and lifestyle, log on to our website latestly.com).