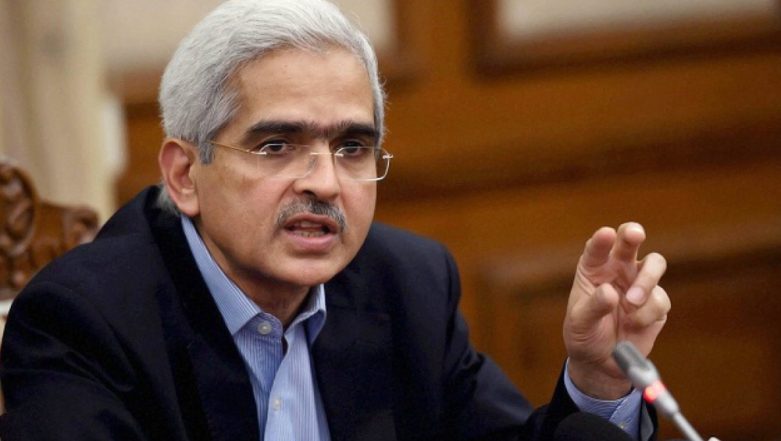 New Delhi, March 26: The Centre has refused to share details related to the appointment of RBI Governor Shaktikanta Das citing a clause in the transparency law which bars disclosure of information, including "records of deliberations of the council of ministers, secretaries and other officers".

Replying to an RTI query, it declined to share the details, including names of short-listed candidates and file notings related to the appointment. Das was on December 11, 2018 named as the Reserve Bank of India (RBI) Governor by the Appointments Committee of the Cabinet headed by Prime Minister Narendra Modi for three years.

The appointment came after Urjit Patel abruptly resigned amid a face-off with the government over issues related to governance and autonomy of the central bank. RBI Governor Shaktikanta Das Takes Stock of Banking Sector.

The RTI application was filed by this correspondent with the Department of Financial Services (DFS) seeking details like copy of any advertisement or vacancy circular issued by the government on appointment of RBI Governor, names of all applicants who had applied for the post and those short-listed for the top post.

The DFS was also asked to provide details on composition of search committee to short-list candidates and copy of minutes of meetings held on deciding the RBI Governor.

In its reply, the DFS said the selection of Governor, RBI is done by the Appointments Committee of the Cabinet on the basis of recommendation made by the Financial Sector Regulatory Appointments Search Committee (FSRASC).

The committee is headed by cabinet secretary as its chairperson and has additional principal secretary to Prime Minister and secretary of the department concerned besides three outside experts as its members, the DFS said, without giving the names of the experts. It had then forwarded the application to the cabinet secretariat.

"In this regard, it is informed that the requisite information about appointment of Shaktikanta Das as Governor, Reserve Bank of India, being Appointments Committee of the Cabinet (ACC) related file notings/documents/records, is exempted from disclosure under Section 8 (1) (i) of the Right to Information Act 205," the cabinet secretariat said in its reply to the RTI application.

Das, a 1980-batch IAS officer of Tamil Nadu cadre, retired as Economic Affairs Secretary in May 2017 and was since appointed India's Sherpa to the G-20 and a member of the Finance Commission.

Urjit Patel, who initially appeared to have toed the government line on issues like demonetisation, clashed with the Finance Ministry last year over issues of liquidity, reserves of the central bank and lending norms.

The face-off had led to the government invoking a never-used-before provision of the RBI Act to bring the Governor to the negotiating table on these issues.

After Das' appointment was announced, Indian-American economist Abhijit Banerjee flayed the government for appointing the retired bureaucrat as the RBI Governor. He also warned that the decision leaves a lot of "frightening" questions about governance issues at key public institutions.

Banerjee, Professor of Economics at the Massachusetts Institute of Technology (MIT), had made a strong pitch for strengthening the credibility of all key institutions like the RBI.

On Patel's sudden resignation, he had said, "We should all worry if this is a sign of institutional stress." Addressing a function a day after Das' appointment, former chief economic advisor Arvind Subramanian said the central bank's autonomy was "sacred" which should not be compromised.