Musicians faced the test of time and commitment when the pandemic known as COVID-19 put a stop to most live shows, placing limitations on how artists could make money in an already difficult and competitive industry. 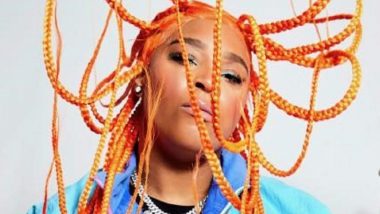 Musicians faced the test of time and commitment when the pandemic known as COVID-19 put a stop to most live shows, placing limitations on how artists could make money in an already difficult and competitive industry.

But as they explored new ways to stay afloat, many artists found success in the well-established alternative – the decades-long practice of licensing their music for television, film, and video games.

One unmatched music artist LG , whose work is featured on productions by Netflix, ABC, Xbox, and USA Network, among others.

Knowing the amount of work she has put in to get where she is now, the rhythmic essence that trickles from her icy cadences has LG (Team Genius) showcasing her boisterous persona in a realm of welcoming bluntness. "Put the Work In" is impeccably buttery, saturated with her techniques as a wordsmith, and hones in on the imagination that LG (Team Genius) exudes as a creative.

Lively, dynamic, and infected by a ferocious no-nonsense attitude, LG (Team Genius) pushes her listeners to get up and get moving. Sometimes all we need is an excellent punch to the gut, and she doesn't hold back.

Her latest song releases with Lyric House include:

"Put The Work In"

Also Featured on PRETTY LITTLE THING  promos and many more!

“Though the entertainment industry as a whole was hit hard in this pandemic, the need for music content never went away,” LG says. “There has been a continuous need for songs to fit into the continuous outpouring of TV content, and that alone has kept me working.”

The practice of licensing songs for a video format is known as synchronization, or sync, licensing.

It's an honor to speak with you today. Why don't you give us some details about you and your story.

Q: How did you get to where you are today?

A: My story started young at the age of 4 my mother would write me songs and sing them to me until I memorized them. 5 years later at the age of 9 I was writing and freestyling my own songs in my basement. At 12 I was gifted protools for Christmas and from that point on I record 8/9 songs a day until I left home for college. As a popular college athlete I started throwing parties and performing at my

Events. The buzz helped me sale over 500 hard copy mixtapes on campus. I was later asked to join 2 college tours. After graduating from college, I was featured on the top Philly radio station power 99 and New York’s top station hot97. A few months later I was approached with an opportunity to make music for TV & Film in LA and decided to take a chance. After 2 years of being in LA, my music is now featured on many ads and trailer for brands like Netflix, Xbox, Nickelodeon, Espn, UFC, and more!

Q: I'm sure your success has not come easily. What challenges have you had to overcome along the way?

A: As an artist there’s many challenges you face, I believe we all face the heavy burden of patience and learning to really understand the lengthy process it takes to grow as a independent artist. We have to continue to be positive when things don’t go as plan or take longer than expected and keep a positive mind state even when we aren’t sure what will come next.

Q: Let's talk about the work you do. What do you specialize in and why should someone work with you over the competition?

A: As an artist I specialize in writing, I have written for TV & Film but I have also written for other artist as well. My versatility allows me to make music of all genre from Hiphop to pop or soul R&b. All you have to give me is a direction and I can bring the idea to life!

Q: What's your best piece of advice for readers who desire to find success in their life?

A: Educate yourself everyday on your craft!

Consistently be a student to the game and always be willing to learn from anyone!

Q: Speaking of success, what does the word mean to you?

A: For me the word Success means growth! Nothing but growth can come from it! People will want to be around someone who is successful and people will always want to work with some one successful. If you are successful you have the power to grow.

A: My next focus is growing as a independent artist and as a business woman. Really unde