Shiv Sena's rebel MLA Deepak Kesarkar on Saturday said that they will not celebrate victory of the floor test, however there will be a grand celebration when the state of Maharashtra achieves considerable development. 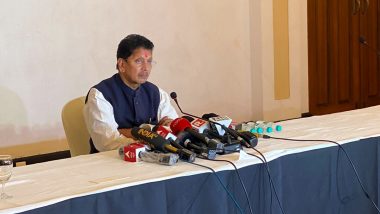 Panaji, July 2: Shiv Sena's rebel MLA Deepak Kesarkar on Saturday said that they will not celebrate victory of the floor test, however there will be a grand celebration when the state of Maharashtra achieves considerable development.

Speaking to media persons in Panaji, Kesarkar said that he has already apologised for MLAs dancing after Eknath Shinde was sworn-in as Chief Minister of Maharashtra.  Maharashtra: ‘Will Reply Legally’, Says Rebel Shiv Sena MLA Deepak Kesarkar on Removal of CM Eknath Shinde as Leader of Party

"In the video which went viral (of dance by MLAs), not all from that group were MLAs, maybe one or two were there. Even that mistake should not have happened," he said.

"We are here to serve the people, we have a big responsibility on our shoulder. After winning this battle, our sentiments are with the development of Maharashtra. We will not hold any celebration as we have said before. Even if we win the floor test, then also we will not celebrate. But in future when the Maharashtra develops, then we will hold a grand celebration," he said.

He said that Shinde's focus is to provide a helping hand to distressed farmers and to stop incidents of suicides.

"Many farmers commit suicide in Maharashtra, but nobody till date has taken it as a mission to stop it. Now we want to stop the incidents of suicide and create a new Maharashtra," he said.

Kesarkar said that in Maharashtra, 49 per cent of the people live in rural areas, out of which 80 per cent are dependent on agriculture.

"So it is our duty to see that Mechanization of agricultural takes place, and we are committed to that. That is why I said that our fight was not for power, but for the betterment of Maharashtra," he said.

(The above story first appeared on LatestLY on Jul 02, 2022 05:26 PM IST. For more news and updates on politics, world, sports, entertainment and lifestyle, log on to our website latestly.com).