In a significant judgement, the Bombay High Court has upheld the rights of the media to report registration of first information reports (FIRs) with the police and cases filed in the courts without attracting defamation proceedings. 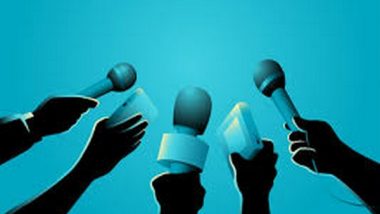 Nagpur, June 25: In a significant judgement, the Bombay High Court has upheld the rights of the media to report registration of first information reports (FIRs) with the police and cases filed in the courts without attracting defamation proceedings.

Stressing the freedom of the press and the importance of the information disseminated by the media, Justice Vinay Joshi, of the court's Nagpur bench, quashed a defamation case filed in 2018 against Lokmat Media Pvt Ltd Charman Vijay Darda and Editor-in-Chief Rajendra Darda, who were represented by lawyer Firdos Mirza. US Supreme Court Strikes Down Abortion Rights: President Joe Biden Says ‘Young Women Carrying Child As Consequence of Incest Hit Hardest by the Ruling’

The ruling came on the libel suit filed by Ravindra G. Gupta of Yavatmal - represented by lawyer Nitin Lambat - who felt aggrieved by a report published in the Lokmat's May 20, 2016 edition, contending it was a false and frivolous news item in connivance with the co-accused with the sole intention of humiliating him and lowering his esteem in society.

"There is no material to show that the applicants (Dardas) were somehow concerned with the publication of the defamatory news item," said Justice Joshi in his judgement delivered on June 20.

He noted that whatever was published in the newspaper was based on the FIR registered against Gupta, which cannot be termed as defamation.

"In order to constitute the offence of defamation, the dual requirement is to be met that the publication must be an imputation, and secondly, there must be an intention to harm the reputation of the person," Justice Joshi said.

The judgement further said that the two Dardas are not the editors of the newspaper, and the Editor is Dilip Tikhile, whose name figures in the imprint line as the person responsible for the publication of news under the Press and Registration of Books Act, 1867.

Justice Joshi noted how daily newspapers devoted some space to crime news, registration of FIRs, filing of court cases, the status of the probes, arrests, etc which "constitutes news events which the public has the right to know".

However, terming accurate reportage on registration of cases as "defamatory" would amount to restricting reporting on investigations to only the final outcome, depriving the right of the public to know the happenings, he said.

"In other words, the freedom of making a true report regarding the affairs which are in the public domain is a right, which flows from the freedom of speech. The action of defamation about true and faithful reporting is unhealthy for a democratic setup," he held.

Hence, filing defamation complaints on such news items is nothing but an attempt to stifle the reporters and informants with an attempt to force them to withdraw the report filed against the persons who are allegedly defamed, he ruled.

The judge also highlighted the power of the press to impress upon the minds of people and hence it was essential that good care is taken by the person responsible for publishing anything in the newspaper.

"No doubt, publication of news on rumour or on hearsay information having no iota of truth is fatal to a journalist. Herein, it is not the case that the FIR was not at all registered or the distorted news item was published," he said in the verdict.

The Dardas had sought the quashing of the criminal proceedings initiated against them by a Magistrate Court on Gupta's defamation complaint, in which he argued that a false, and defamatory report was published without verifying the facts.

(The above story first appeared on LatestLY on Jun 25, 2022 08:25 PM IST. For more news and updates on politics, world, sports, entertainment and lifestyle, log on to our website latestly.com).