Mehul Choksi, Wanted in PNB Fraud Case, Allowed To Go Back to Antigua for Treatment After Bail From Dominica HC

Indian Fugitive jeweller Mehul Choksi, who is wanted in India in Rs 13,500 crore Punjab National Bank (PNB) fraud case, was allowed to travel back to Antigua and Barbuda after he was granted bail by a Dominica High Court. 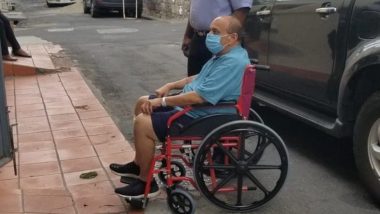 New Delhi, July 13: Indian Fugitive jeweller Mehul Choksi, who is wanted in India in Rs 13,500 crore Punjab National Bank (PNB) fraud case, was allowed to travel back to Antigua and Barbuda after he was granted bail by a Dominica High Court.

The latest court order comes as a setback for Indian agencies that had moved court in Dominica to get Choksi repatriated to India.  PNB Fraud Case: Mehul Choksi Granted Bail by Dominica High Court on Medical Grounds

He said, "Dominica courts finally upheld the rule of law and rights of a human to be treated in the medical facilities of his choice. And all attempts by various agencies did not bear fruits. There is a solace in saying that all clever foxes end up as fur coats."

The court has asked Choksi to deposit Eastern Caribbean dollars 10,000 (around Rs 2.75 lakh) as surety for the bail.

His legal team approached the Dominica high court last week seeking relief on the ground that his health was deteriorating and he needed urgent medical attention.

Justice Abroad's Director and London-based international barrister Michael Polak is acting for Choksi as part of his legal team said, "The High Court of Dominica granted Choksi bail so that he can return to Antigua for medical treatment and adjourned his judicial review application and the criminal proceedings against him for unlawful entry."

He said that Choksi is suffering from a number of ailments including cerebrovascular disease, coronary artery disease, congestive heart failure, and blood dyscrasias. He is also suffering from a subdural haematoma, the collection of blood between the skull and the surface of the brain.

"Dominican doctors expressed concern that Choksi's current health problems are serious and reported that he is in need of the urgent medical assistance of a Neurologist and Neurosurgical Consultant and that this care is not available in Dominica," Polak said.

Polak said, "We are very pleased that the Dominican Court has made the principled and humanitarian decision to release Mr Choksi so that he can access specialist medical care in Antigua."

He stated that Choksi has been through a very difficult few weeks and has been subject to an ordeal which has had a detrimental effect on him physically. "It is the right outcome that he be able to return to Antigua, where he can access the medical attention that he requires and be with his family," he added.

Choksi's bail plea was supposed to be heard on July 23 but was heard on July 12 on medical grounds. His lawyers had moved the court pleading that he was suffering from a neurological disorder for which he needed treatment in Antigua.

The bail order comes amid allegations from Choksi's family and lawyers that the jeweller was abducted from Jolly Harbour area of Antigua by agents of Indian agencies and forcibly taken to Dominica on May 23.

Choksi is facing a case of extradition in Antigua on India's request.

Choksi had gone missing on May 23 from Antigua and Barbuda, sparking a massive manhunt. He was later captured in Dominica where he faced charges of entering the country illegally.

Choksi had filed a case in the high court of Dominica, seeking to quash the proceedings against him alleging that his arrest was "dictated" by representatives of the Indian government.

The case was filed against the Immigration Minister of the Caribbean nation, its police chief and the investigating officer of the case.

Choksi pleaded that the decision to charge him for illegal entry violated the law and, accordingly, was null and void.

Choksi's lawyer had alleged that their client was kidnapped and forcibly taken to Dominica.

Choksi is wanted in India by the Central Bureau of Investigation and the Enforcement Directorate.

(The above story first appeared on LatestLY on Jul 13, 2021 01:35 PM IST. For more news and updates on politics, world, sports, entertainment and lifestyle, log on to our website latestly.com).