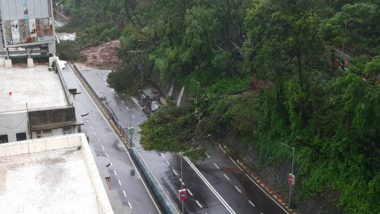 Mumbai, Aug 6: Intermittent heavy showers continued to lash Mumbai a day after it was battered and shattered by stormy weather that left a trail of destruction, fallen trees or branches, hundreds of vehicles submerged or broken down, officials said here on Thursday.

A minor landslide occurred when a portion of a hillock at the posh Malabar Hill crashed down near Pedder Road, but luckily there were no casualties.

Intermittent heavy showers continued to lash #Mumbai a day after it was battered and shattered by stormy weather that left a trail of destruction, fallen trees or branches, hundreds of #vehicles submerged or broken down, officials said on Thursday.#MumbaiRains

The IMD Mumbai said that the Mumbai city received 33.1 cms and the suburbs got around half or 16.2 cms rainfall.

In the past 24 hours, many areas of south Mumbai witnessed their maiden floods, including those which had escaped flooding during the July 26, 2005 Great Floods, when the city recorded a staggering 160 cms rainfall in a 24-hour period.

Locals attribute this to the combined effects of the ongoing Mumbai Metro and Coastal Road works, though officials have not commented on the issue.

The gusty winds of upto 70 kmph on Wednesday uprooted over a hundred trees jamming many roads in south Mumbai, which the civic workers were busy clearing since night.

At least 250 commuters stranded in two trains between Byculla and Masjid Bunder stations on the CR were rescued by police and disaster teams with rubber boats sailing on the flooded tracks.

In some areas in south Mumbai, Kandivali, Dahisar, Kurla, Parel, Dadar, Wadala and Sion, water rushed into ground-floor homes, shops or offices in south Mumbai as incessant rains continued all day, and the subways in Dahisar, Malad and Andheri were flooded preventing east-west movement of traffic.

With thousands of commuters getting stranded, the BrihanMumbai Municipal Corporation (BMC) on Wednesday threw open around 130 civic schools to enable them spend the night there.

The IMD has forecast heavy to extremely heavy spells of rain in Mumbai and the coastal Konkan area in the next 24 hours.

Amid apprehensions of a 2005-like flood situation, Chief Minister Uddhav Thackeray reviewed the monsoon situation and the state government has kept around 15 NDRF teams in readiness for Mumbai, Thane, Palghar, Satara, Sangli and Kolhapur to help in any contingencies.

(The above story first appeared on LatestLY on Aug 06, 2020 12:44 PM IST. For more news and updates on politics, world, sports, entertainment and lifestyle, log on to our website latestly.com).