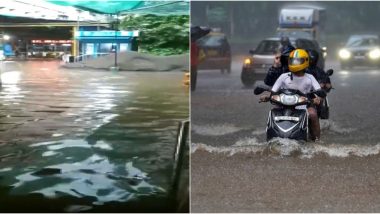 Nair Hospital and roads in Mumbai due to heavy rains. (Photo Credit: Twitter)

Mumbai, August 6: With the incessant rains paralysing the movement of the financial capital for a third straight day, rainwater entered Mumbai's Nair Hospital on Thursday and flooded it. The corridors of the hospital were seen flooded. Meanwhile, India Meteorological Department stated that Mumbai's Colaba received 331.8 mm and Santacruz received 162.3 mm rainfall in past 24 hours.

Informing about the weather conditions, the IMD stated that rainfall would continue for the day in Mumbai and suburbs, which will be accompanied with strong winds reaching 60-70 kmph occasionally gusting to 80 kmph. IMD even issued thunder/lightning in some areas and asked people to remain cautious. Mumbai Rains: City Continues to Witness Heavy Rainfall, Vihar Lake That Supplies Water to Mumbaikars Overflows; See Pics.

Mumbai city and suburbs are very likely to receive few spells of moderate to heavy rainfall (1-2 cm/hr) during next 3- 4 hrs. accompanied with strongwinds reaching 60-70 kmph occasionally gusting to 80 kmph hrs. during next 3-4 hrs . Possibility of thunder/lightning in some areas

Here's the video of Nair Hospital:

Earlier reports arrived that Mumbai received its heaviest rainfall in 46 years and recorded 64 per cent of its monthly quota of rain in the first five days of August. Citing the heavy rainfall, strong winds and waterlogging, Chief Minister Uddhav Thackeray has asked people to stay indoors and venture out only for essential work.

Prime Minister Narendra Modi on Wednesday dialled CM Thackeray and assured him of all possible support regarding the situation prevailing in Mumbai. Meanwhile, Brihanmumbai Municipal Corporation has appealed to the people to avoid BPT colony skywalk as it is waterlogged and informed about the BEST bus diversions near Nair Hospital. BMC even stated that railway traffic has been restored.

(The above story first appeared on LatestLY on Aug 06, 2020 10:31 AM IST. For more news and updates on politics, world, sports, entertainment and lifestyle, log on to our website latestly.com).