K Unnikrishnan, father of Major Sandeep Unnikrishnan who was killed in 26/11 attack, Tuesday said no government has so far been sincere in dealing with terrorism and rued that India does not have a "stern" policy to deal with it. 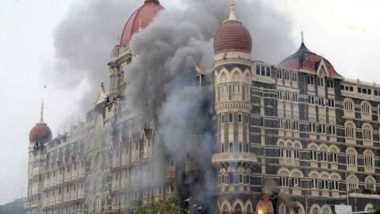 Bengaluru, November 27: K Unnikrishnan, father of Major Sandeep Unnikrishnan who was killed in 26/11 attack, Tuesday said no government has so far been sincere in dealing with terrorism and rued that India does not have a "stern" policy to deal with it.

"If you are totally against terrorism, then you have to be sincere in that. No government so far has been sincere in dealing with terrorism or cross-border terrorism," he told PTI in an interview here. 26/11 Mumbai Terror Attack: 10 Years After Attack, People Left With Faded Memories of the Mayhem.

Major Unnikrishnan had lost his life while battling the Pakistani Lashkar-e-Taiba terrorists during the 26/11 attack on Mumbai in 2008. He was leading a team of NSG commandos to flush out terrorists from the Taj Palace Hotel in Mumbai when he was fatally wounded. He was conferred the Ashok Chakra, the country's highest peacetime gallantry award, on January 26, 2009.

Similarly, it was also bad to support destructive forces like Afzal Guru, who had masterminded the Parliament attack and later was hanged, the father of the deceased Major said.

"At that time, many people and politicians felt Afzal Guru should not be hanged. How can we expect this? He was the mastermind of the Parliament attack. Parliament is the nerve-centre of India," Unnikrishnan said.

"If he (Afzal) is a culprit, you cannot say he is a scholar and has a very good brain and then he should not be punished. That is very bad. If you have a good brain, then you should use it for benefit of humanity. You cannot support such a person," he added.

Asked if he was happy with the Narendra Modi government's steps to tackle terrorism, Unnikrishnan said he does not want to give credit to any government, but added that vigilance has increased a lot.

Unnikrishnan praised Modi, calling him a good Prime Minister and added he was satisfied with his good intent. "There are loopholes in any system, but I can tell you that we have a good Prime Minister. His concern for the nation is totally satisfying," he said. "There were a lot of Prime Ministers. I have not seen such a person in my lifetime. I have also seen Jawaharlal Nehru and Lal Bahadur Shastri, but was not mature to understand politics then," he added.

Unnikrishnan, however, was critical about Modi government's demonetisation move. He also said the Kashmir dispute can only be solved by India and Pakistan amicably without the latter bringing religion into it. "I have an idea, why they (India and Pakistan) cannot solve the Kashmir issue amicably? Why is Pakistan bringing religion into it?" he asked.