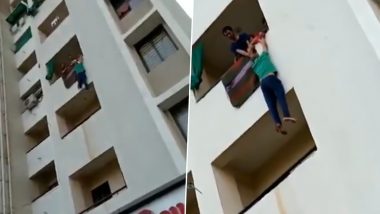 Ahmedabad, May 19: A man from Gujarat's Ahmedabad attempted suicide after a domestic tiff with his wife over spicy "sabzi". In the bizarre incident, the man threatened to jump from the third floor of a residential building in Chandkheda after an argument with his wife. The man was saved by three neighbours who caught hold of him and pulled him over from the balcony, Ahmedabad Mirror reported. Madhya Pradesh: Upset Over Wife Visiting Her Parent’s House for Krishna Janmashtami, Bhopal Man Commits Suicide on WhatsApp Video Call After a Fight.

The video of the incident is going viral on social media. In the clip, a man wearing a green shirt can be seen hanging from a balcony. The video further shows three men pulling him over and saving his life. Delhi Man Commits Suicide, Blames Wife in Suicide Note For Suspecting Him of Having Extra-Marital Affair And Public Shaming Him.

Man Tries to Jump off the Balcony in Ahmedabad:

The following video may be disturbing to some viewers. Viewers discretion is advised.

Fight over lunch menu, husband tries to jump out of his balcony. #Ahmedabad 😥 pic.twitter.com/iXLVCN4foV

According to the report, the husband allegedly demanded hot and spicy food from his wife which led to an argument between the couple. The fight promoted the husband to hang from the balcony’s railing, threatening his spouse to jump off from the third-floor balcony.

The man was luckily saved by neighbours, Ahmedabad Mirror reported. The incident took place three to four days ago. "No complaint or application of the incident has been made at the police station," Chandkheda police inspector BK Gamar said.

(The above story first appeared on LatestLY on May 19, 2020 05:05 PM IST. For more news and updates on politics, world, sports, entertainment and lifestyle, log on to our website latestly.com).