There is need for "akhand Bharat" (undivided India) and it will be good for countries like Pakistan and Afghanistan that got separated from India, RSS chief Mohan Bhagwat said. 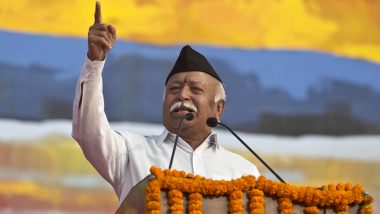 Hyderabad, February 26: There is need for "akhand Bharat" (undivided India) and it will be good for countries like Pakistan and Afghanistan that got separated from India, Rashtriya Swayamsevak Sangh (RSS) chief Mohan Bhagwat said at a book launch event on Thursday. Mohan Bhagwat also described Pakistan and Afghanistan as "ours", adding that it does not matter what people of those practice. RSS Chief Mohan Bhagwat Wants 'Nationalism' Word to be Avoided, Says It Refers to 'Hitler, Nazism'.

"We consider countries like Pakistan and Afghanistan as ours. Once they are with us, it does not matter what they practise or what they eat. It is not colonialism. India believes in Vasudhaiva Kutumbakam (the world is one family)," Bhagwat was quoted by TOI as saying. Asserting that "akhand Bharat" is possible, the RSS chief said even division of India was seen as impossible six months before it happened. RSS Chief Mohan Bhagwat, Says 'Every Indian is a Hindu, Finding Unity in Diversity is Hindutva'.

"Jawaharlal Nehru rubbished it (partition of India) as a dream of fools. Similarly, anything can happen," Bhagwat said. "Lord Wavell (during British rule) said in British Parliament that god has made India one and who is going to divide it," he added. He also clarified that "akhand Bharat" does not mean imposing colonialism. "When we talk about united, we don’t talk about power, it is about people," he said.

"They are united through ‘sanatana dharma,’ which is called Hindu dharma," he added. "Akhand Bharat" is a concept, according to which, India, Pakistan, Nepal, Afghanistan, Bangladesh, Sri Lanka, Myanmar, and Bhutan are one nation.

(The above story first appeared on LatestLY on Feb 26, 2021 12:00 PM IST. For more news and updates on politics, world, sports, entertainment and lifestyle, log on to our website latestly.com).