Assam Floods: 102 Dead in Flood-Related Incidents, Over 56 Lakh People Affected in 30 Districts of the Northeastern State 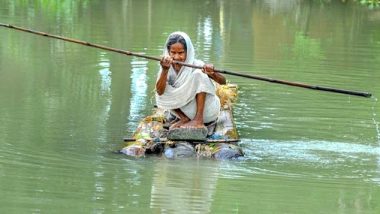 Guwahati, July 27: The flood situation in Assam continued to remain grim with the death toll touching 102 on Monday. According to a tweet by ANI, as many as 56,71,018 people have been affected in 30 districts of Assam since May 22. In the wake of the worsening situation, the state government of Assam has set up 615 relief camps. The death toll due to the deluge in the northeastern state has mounted to 102 so far. Reports inform that a total of 123 people have lost their lives due to flood and landslides in the state this year.

Several rivers and their tributaries in Assam are flowing above danger mark, triggering flash floods across the state. The Brahmaputra river is flowing above the danger mark in several areas including Guwahati, Tezpur, Dhubri and Goalpara towns. Meanwhile. its tributaries such as Dhansiri, Jia Bharali, Kopili, Beki and Sankosh at Golokoganj in Dhubri are also flowing above the danger levels at various places. Assam Floods Devastating Images: Houses Submerged, Several Animals Dead as Brahmaputra River Water Level Rises.

#AssamFloods: Since 22nd May, total 56,71,018 people have been affected in 30 districts of Assam. The state government has set up 615 relief camps and 102 people have lost their lives in flood-related incidents, till now. pic.twitter.com/OAlg5jlc67

Wildlife has also been severely hit by the floods in Assam. The state government informed that the deluge has so far claimed the lives of 129 different animals. Due to the floods in the state, connectivity has taken a hit as roads, bridges, have been damaged at various places in Biswanath, Lakhimpur, Dhubri, Chirang, Nagaon, Jorhat, Barpeta, Majuli districts.

The flood water has caused massive erosions at different places of Biswanath, South Salmara, Chirang and Majuli districts. The ASDMA informed that at present, 2,265 villages were inundated and 1,12,667.06 hectares of crop area has been damaged across Assam.

(The above story first appeared on LatestLY on Jul 27, 2020 12:28 PM IST. For more news and updates on politics, world, sports, entertainment and lifestyle, log on to our website latestly.com).