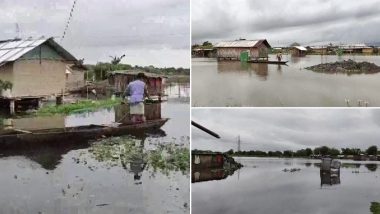 Guwahati, May 27: Normal life was disrupted in Assam due to floods and landslides with at least seven districts being badly affected by flash floods since Tuesday. The number of districts affected by flood in Assam rose to seven from five affecting around 1.95 lakh people of 230 villages in the northeastern state. Reports inform that over 1,000 hectares of cropland n the flash floods. The Assam State Disaster Management Authority (ASDMA) officials said that National Disaster Response Force (NDRF) and State Disaster Response Force (SDRF) teams have already been deployed at 40 locations with equipment for any emergency. Weather Update: Met Department Predicts Heavy to Very Heavy Rainfall in Assam, Meghalaya and Arunachal Pradesh During Next 5 Days.

According to details by the Central Water Commission, the Brahmaputra river was flowing above the danger level in Jorhat district, while Jia Bharali was over the danger mark in Sonitpur district. The first wave of the deadly flood was reported from Goalpara and Tinsukia districts. According to data by ASDMA, Goalpara has been the worst-hit with the highest number of 1.68 lakh flood-hit people, followed 10,943 in Nalbari and 7,897 in Dibrugarh.  In the wake of the worsening situation, the Assam State Disaster Management Authority (ASDMA) have already been provided shelter in 35 relief camps.

Assam: Floods in parts of Dibrugarh district due to incessant rain in the region. (26.05.20) pic.twitter.com/BVUobetz6i

Assam: Flash floods in parts of Kamrup district due to incessant rains in the region. (26.05.20) pic.twitter.com/SiMdpsBO5H

The weather conditions have turned worse in three northeastern states - Assam, Arunachal Pradesh and Meghalaya since Tuesday. Reports inform that at least three people have lost their lives while over 2,50,000 people of nearly 350 villages have been affected due to floods and landslides in these three states.

In its weather bulletin, the India Meteorological Department (IMD) had warned of extremely heavy rainfall in Assam, Meghalaya and Arunachal Pradesh. "Due to strong southerly wind from Bay of Bengal to northeast India at lower tropospheric levels; Heavy to very heavy rainfall with extremely heavy falls likely at isolated places over parts of north-eastern states Assam & Meghalaya and Arunachal Pradesh during 26-28”, the IMD said.

(The above story first appeared on LatestLY on May 27, 2020 08:24 AM IST. For more news and updates on politics, world, sports, entertainment and lifestyle, log on to our website latestly.com).