Assam Shocker: Girl Made to Drape Curtain Around Legs to Sit for Entrance Exam After College Objects to Shorts

Jublee Tamuli, a 19-year-old girl from Assam's Biswanath district who turned up in shorts for an entrance test, was compelled to wrap a curtain around her legs in order to sit for the exam. 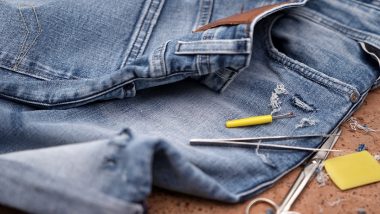 Tezpur, September 17: Jublee Tamuli, a 19-year-old girl from Assam's Biswanath district who turned up in shorts for an entrance test, was compelled to wrap a curtain around her legs in order to sit for the exam. The entrance exam, conducted by Assam Agricultural University (AAU), was held Girijananda Chowdhury Institute of Pharmaceutical Sciences (GIPS) in Tezpur on September 15. According to the girl, the college authorities refused her to sit for the exam in shorts. Bermuda Pants, Shorts Banned; Vadodara Pension Payment Office Issues Dress Code for Visitors.

Tamuli reached Tezpur with her father. She was not stopped or questioned while entering the examination centre. However, she was refused entry into the examination hall allegedly because she was in shorts. "When I was on my way to the examination hall, an observer asked me to wait while all other students were allowed to enter. I had all my documents including admit card, Aadhaar card, photocopy, but they didn’t check my documents and told me that short dresses are not allowed," she told India Today. Bijnor Shocker: Man, Brother Made to Wear Shoe Garland, Paraded by Girl's Family; 3 Arrested.

Tamuli said that she had pointed out that no dress code was mentioned on her admit card. However, her protests fell on deaf ears. Disappointed Tamuli then ran to his father in tears. "Finally, the Controller of Exams said I could take the exam, if a pair of pants could be arranged. So my father rushed to the market to buy a pair," she was quoted by The Indian Express as saying. All this while, Tamuli was losing precious time.

She was getting restless when two girls came to suggested her and her to drape a curtain around her legs. She did and then appeared for the exam. When her father a trouser from a market about 8 km away, he was told the issue has been resolved. Tamuli described the incident as the "most humiliating" experience of her life.

"Is it a crime to wear a short dress? Many girls wear short dresses. If they (college) don’t allow it then it should be mentioned on the admit card," she said. Following the incident, Dr Abdul Baquee Ahmed, Principal, GIPS, said that his college did not have any say in the examination.

"We do not have anything to do with the exam – our college was just hired as a venue for the exam. Even the invigilator in question was from outside. There is no rule about shorts, but during an exam, it is important that decorum be maintained. Parents should also know better," he said.

(The above story first appeared on LatestLY on Sep 17, 2021 01:43 PM IST. For more news and updates on politics, world, sports, entertainment and lifestyle, log on to our website latestly.com).