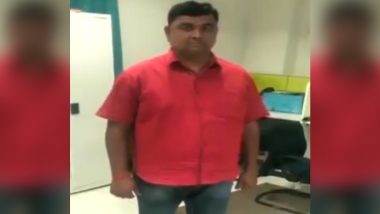 Lucknow, October 18: In a major breakthrough, Special Task Force (STF) of Uttar Pradesh police on Sunday arrested the main accused in the Ballia firing. According to reports, Dhirendra Singh, was arrested from Lucknow. Singh was among the two accused arrested on Sunday by the UP police. Ballia Firing: Police to Invoke NSA, Gangster Act; Main Accused Evades Police.

The identity of the other accused is yet to be ascertained. Till now, four arrests have been made in connection with the firing incident. Singh and his accomplices were taken to an undisclosed location, where they were questioned. As per news agency ANI, arms were recovered from the possession of Singh's accomplices. UP: Firing at Meeting Called to Allot Shops in Ballia, One Dead (Watch Video).

IG STF Amitabh Yash said, "Dhirendra Singh & his accomplices were arrested from Lucknow today. They're being questioned at an undisclosed location. Arms recovered from the possession of his accomplices. STF is gathering more information on the weapons used at the time of the incident." Notably, on Saturday, Singh had claimed in a video message that he was framed in the case.

A man had died after bullets were fired during a meeting for allotment of shops under government quota, in Durjanpur village of Ballia on Thusday. pic.twitter.com/rfiS2cbRA0

The incident took place on October 15 when a person died in the firing that took place at a meeting for allotment of shops under government quota, in Durjanpur village of Ballia district of the state. The meeting was called at Panchayat Bhawan in Durjanpur village to allot shops under the government quota. The deceased was identified as Jaiprakash alias Gamapal. During the clash, Singh fired the bullet.

(The above story first appeared on LatestLY on Oct 18, 2020 12:15 PM IST. For more news and updates on politics, world, sports, entertainment and lifestyle, log on to our website latestly.com).