The deceased, identified as 54-year-old Dharmaraj Hazra, was a member of BJP's Shaktipur Mandal Committee. 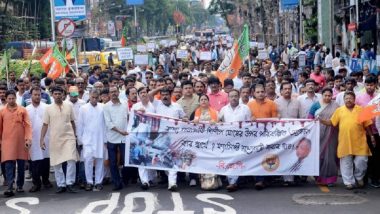 Kolkata, July 2: A Bharatiya Janata Party (BJP) worker in West Bengal's Purulia was found dead on Monday. His body was recovered from a lake in Shaktipur village with hands tied. The party claims he was targeted by cadres of the rival Trinamool Congress (TMC).

The deceased, identified as 54-year-old Dharmaraj Hazra, was a member of BJP's Shaktipur Mandal Committee. The party's district president (north) Gouri Shankar Ghosh said Hazra had been receiving threats from "TMC goons" over the past few months who wanted him to quit the BJP.

The threats, Ghosh alleged, became rampant after BJP emerged as the prime challenger to the Trinamool in the recently conducted panchayat elections. "On Sunday they killed him and consigned his body in a lake," he claimed.

TMC MLA from Shaktipur, Rabiul Alam Chowdhury, refuted the charges levelled by the BJP functionary, calling them baseless. Chowdhury said he can "guarantee" that no worker of the Trinamool is behind Hazra's murder.

The incident comes in the backdrop of two BJP workers in Purulia being found dead under mysterious circumstances. The bodies of Trilochan Mahato and Dulal Kumar were recovered from two villages of Purulia on May 31 and June 2.

Earlier in the day, BJP workers in Purulia staged a demonstration in front of Santaldih police station, seeking action against TMC workers who allegedly kidnapped the party's labour-wing member Parimal Mahato. Hours later, however, it was learnt that Mahato had jumped ship to the Trinamool.

(The above story first appeared on LatestLY on Jul 02, 2018 08:59 PM IST. For more news and updates on politics, world, sports, entertainment and lifestyle, log on to our website latestly.com).