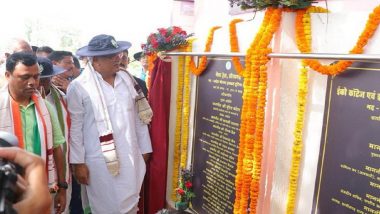 New Delhi, May 25: Chhattisgarh Chief Minister Bhupesh Baghel on Wednesday inaugurated the Jheeram Valley Martyrs Memorial in Jagdalpur and paid tribute to the memory of the martyrs of the Jheeram Valley incident in Bastar district. Nine years ago, 32 people including Congress leaders Nandkumar Patel, Vidya Charan Shukla and Mahendra Karma were killed in a Naxal attack at Jheeram Valley on May 25, 2013.

"I pay my humble tribute to the martyrs of the heart wrenching incident of Jheeram Valley. These were the public heroes who were on the path of bringing about a transformation in the lives of farmers, youth, children and women of the state. Our veteran leaders would have been really happy to see justice being ensured to every section in Chhattisgarh today," the chief minister said unveiling the 'Jhiram Ghati Shaheed Smarak' at Lalbagh ground in Jagdalpur. The statues of politicians and security personnel killed in the attack have been installed at the memorial site. Chhattisgarh CM Bhupesh Baghel Bags Best Chief Minister Tag as Per IANS-CVoter Governance Index.

During his tour of Nangur, the chief minister said that he will not allow privatization of the Nagarnar steel plant under any circumstances. "We will not allow the steel plant to go into private hands. Whether it is run by the Centre or the Chhattisgarh government... I have always been associated with the interests and concerns of the local people in Nagarnar. I have also sat on dharna and have also gone on a padyatra," he added.

(The above story first appeared on LatestLY on May 25, 2022 08:39 PM IST. For more news and updates on politics, world, sports, entertainment and lifestyle, log on to our website latestly.com).