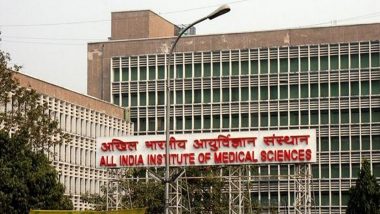 New Delhi, November 26: With the All India Institute of Medical Sciences (AIIMS), New Delhi, still struggling to get its servers up and running after a massive ransomware attack earlier this week, cyber-security researchers on Saturday said the most reported attacks in the healthcare industry, which rose during the pandemic, involve the leak or sale of databases on the Dark Web.

Those behind the cyber attack have warned AIIMS to "prepare for a negotiation". Delhi Police are investigating the cyber attack. Meanwhile, AIIMS officials said that all affected online patient services are now being run on manual mode. According to CloudSEK, a massive spike in cyberattacks on healthcare organisations has been witnessed during the pandemic.

"Our research shows that in the first four months of 2022, the number of cyberattacks on the industry rose by 95.34 per cent compared to the same period in 2021. The Indian healthcare sector was the second most targeted when it comes to cyberattacks worldwide," the company spokesperson said.

Protecting patients' medical and financial information has emerged as a new challenge for healthcare organisations. According to Indusface, an application security SaaS company, there were more than 1 million cyber attacks of various types across Indusface's global healthcare clientele. Of these, 278,000 attacks were reported in India, highlighting the vulnerabilities of the Indian healthcare sector.

Three months after the major attack wiped out NHS systems, patients' records are still missing and safety has been compromised, according to reports. The August attack has been the most disruptive cyber-security incident on the health service since WannaCry ransomware attack in May 2017, which disrupted 80 NHS trusts and 603 NHS organisations, including 595 GP practices.

"Organisations should frequently update and patch networks, systems, and software. Keep several backups, both online and offline, in different and secure places. Keep an eye on logs for any unexpected traffic and activity on websites and other applications," advised CloudSEK. Healthcare experts, including hospital staff, should avoid clicking on suspicious emails, messages and links, it said.

(The above story first appeared on LatestLY on Nov 26, 2022 07:13 PM IST. For more news and updates on politics, world, sports, entertainment and lifestyle, log on to our website latestly.com).