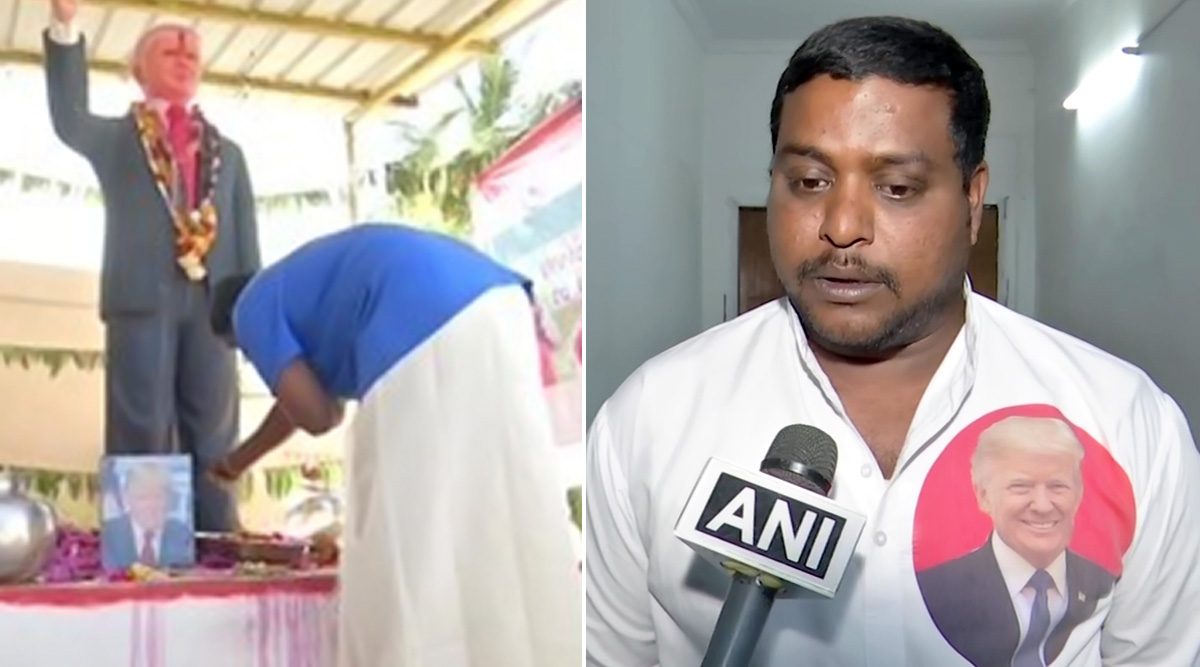 Donald Trump is God For this Telangana (Photo Credits: ANI)

Hyderabad, February 24: Bussa Krishna, a die-hard fan of United States President Donald Trump on Monday said that his happiness knew no bounds as his 'God' (Trump) is on a visit to India. Krishna, who loves being called as Krish Raju, started worshiping Trump in 2016 after he claimed that the US President appeared in his dreams. On Trump's visit to India on Monday, the Telangana man said that he is feeling very proud that his 'God' has come to India and hopes to meet him soon. "I'm feeling proud as my God has come to India. I worship Trump as God and believe that I shall meet him soon. He has played a major role in fight against terrorism", Krishna said.

Bussa considers himself to be a devotee of the POTUS. Krishna has also installed a 6-feet statue of the US President near his house in 2019 and offers prayers on a daily basis near his house in Konne village of Janagaon district of the southern state. The man also requested the Central government to fulfill his wish of meeting his idol during his upcoming India visit. Donald Trump India Visit Live News Updates.

Bussa Krishna, who installed a 6-feet statue of US President Donald Trump last year & worships him: I'm feeling proud as my God has come to India. I worship Trump as God and believe that I shall meet him soon. He has played a major role in fight against terrorism. #Telangana pic.twitter.com/XaOLDw808m

According to reports, the man's friends told ANI that the villagers have started referring to him affectionately as 'Trump' Krishna, due to his devotion to the POTUS. The US President, his wife Melania Trump and a high-level US delegation arrived in India on Monday morning. Donald Trump Posts Second Tweet in Hindi After 'Namaste Trump' Event, Here's What He Said.

Trump and Melania visited the Sabarmati Ashram and later addressed a crowd of about 120,000 at the Motera Stadium in Ahmedabad. For him and First Lady Melania Trump, the next stop is to be Agra and the Taj Mahal. They fly to Delhi Monday night for fully packed Tuesday, when he is to hold bilateral talks with Prime Minister Narendra Modi.