Speaking to media, an emotional Tikait said that the administration was trying to conspire against the farmers to end their peaceful movement. "We had come here to protest against the three farm laws demanding their repealing," he said. 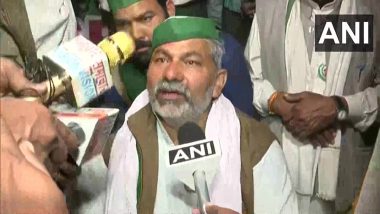 Tikait, who has been named in the Delhi Police FIR in connection with the violence at several parts of the city during the 'Kisan Gantantra parade' on Republic Day, made his appearance at the protest site two days later, saying: "We were ready to surrender peacefully but the BJP's local MLAs have been called to beat the protesting farmers."

Watch Video of Rakesh Tikait as he Breaks Down at Ghazipur Farmers Protest Site:

"There is a conspiracy against us. Now, I will not surrender even if the police fires bullets at us," he announced from the dais of the farmers' protest site. UP Police Has Come To Arrest the Agitating Farmers at Ghazipur Protest Site, Says BKU Leader Rakesh Tikait.

👉'BJP MLAs along with their 100s of workers are here'

👉'They are beating farmers'

👉'There could be gunshots fired as well'

👉'None of us WILL SURRENDER'

👉'#FarmersProtest will NOT END' pic.twitter.com/x5LObbcRpq

Tikait also said that he will hang himself but he will not surrender now and urged the farmers to save their tents that have been in place since November 26 last year.

Speaking to media, an emotional Tikait said that the administration was trying to conspire against the farmers to end their peaceful movement. "We had come here to protest against the three farm laws demanding their repealing," he said.

He alleged that the people of the BJP are trying to kill the farmers. "This is injustice to farmers of the country. The three laws must be repealed and our movement will keep on going till the time the three laws are not rerpealed," he said. Farmers' Protest: Ghaziabad District Admin Ordered To Get Ghazipur Protest Cleared.

👉'Policemen who came to meet were CRYING. They were in TEARS'

👉'Both KISAN & JAWAN are in tears'

"I will keep on fighting for the farmers' right," he added. The Ghaziabad administration has served notice to farmers to vacate the protest site.

Earlier in the day, there was heavy deployment of police personnel and security forces at the Ghazipur protest site, where the farmers have been camping since November 26 last year.

(The above story first appeared on LatestLY on Jan 28, 2021 08:03 PM IST. For more news and updates on politics, world, sports, entertainment and lifestyle, log on to our website latestly.com).