Ganesh Chaturthi 2022: BMC Says Strict 'No' to Ganpati Idols Made of Plaster of Paris

Ganpati idol makers have voiced their objections to BMC, thereby claiming that it's not possible to make more than two crore clay idols in a short time. 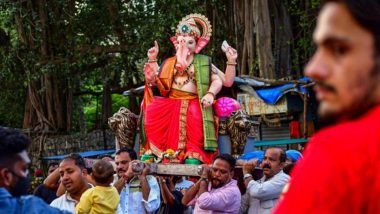 Mumbai, June 29: Ahead of the Ganesh Chaturthi festival in Mumbai, the Brihanmumbai Municipal Corporation (BMC) said that there will be no plaster of Paris idols for the Ganesh festival during a meeting held with the Sarvajanik Ganesh Utsav Samanvay Samiti.

Speaking about the same civic chief Iqbal Singh Chahal said, "This year, we have issued an advisory. From next year, there will be punishment, too." According to a report in Midday, those found selling PoP idols during the Ganpati festival will face fine and judicial action. Chilean Man Receives Rs 1.42 Crore As Salary Instead of Rs 43,000, Goes Missing After Informing HR and Promising To Return Money.

It must be noted that in May 2020, the Central Pollution Control Board (CPCB) issued detailed guidelines banning the use of PoP for idols. Back then, the CPCB said that PoP causes serious pollution in water bodies. However, the ban was postponed for a year after Ganpati idol makers expressed fear of losing their livelihood.

This year, the country's richest civic body finally sent out notices for implementation of the rule. But once again, idol makers have voiced their objections to BMC, thereby claiming that it's not possible to make more than two crore clay idols in a short time.

The Samanvay Samiti has also written a letter to Chahal regarding the issue. During its meeting with the Samiti that was held on Monday, the civic body made its stand against PoP crystal clear. Maharashtra Political Crisis Live Updates: Ahead of Floor Test, Eknath Shinde Says, 'In Democracy Majority Matters and We're Having That'.

Besides Samiti and BMC officials, the meeting was also attended by Shiv Sena MLA Ajay Chaudhari and former Mayor Kishori Pednekar. Meanwhile, the Samanvay Samiti has once again appealed to the civic authority to allow the use of PoP without any hazardous substance.

(The above story first appeared on LatestLY on Jun 29, 2022 04:58 PM IST. For more news and updates on politics, world, sports, entertainment and lifestyle, log on to our website latestly.com).