For the second consecutive year, the Maharashtra government has decided to ban gigantic idols of Lord Ganesha and mega public celebrations for the upcoming 10-day Ganeshotsav festival starting September 10, even as the organisers cried foul. 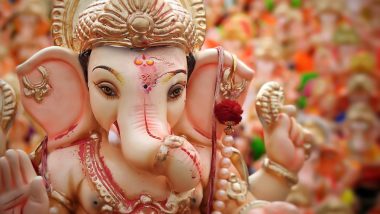 Mumbai, June 29: For the second consecutive year, the Maharashtra government has decided to ban gigantic idols of Lord Ganesha and mega public celebrations for the upcoming 10-day Ganeshotsav festival starting September 10, even as the organisers cried foul. In view of the anticipated Covid-19 'third wave', the state government on Tuesday issued a detailed notification restricting the height of the idols to up to 4-feet at public marquees and 2-feet for home worship.

No processions will be permitted for the start of the festival on September 10 or for the 'Visarjan' (immersion) ceremonies on various dates till the final adieu on September 19, sounding a dampener on the much-awaited festival.

Objecting to the notification, the president of the influential BrihanMumbai Sarvajanik Ganeshotsav Samanvay Samiti (BSGSS), Naresh Dahibavkar, termed it as "a rude shock" for the second year running.

"The organisers and idol-makers are surprised and stunned. We had sent several letters to the state government but they remained unacknowledged and now suddenly this unilateral and one-sided decision has come," Dahibhavkar said in a strong statement.

He appealed to Chief Minister Uddhav Thackeray to convene a meeting of the BSGSS and others in the state to discuss and jointly finalise the norms for the 2021 Ganeshotsav.

As in 2020, the government has recommended giving priority to health camps or blood donation drives or health awareness campaigns for coronavirus, malaria, dengue etc., with highest levels of cleanliness maintained by all the public mandals and organisers of the mega Ganeshotsav groups.

Depending on the levels of restrictions that may be in force during the festival, the authorities have made it clear that these will not be eased during Ganeshotsav and directed the public 'mandals' to ensure that there is no overcrowding during the daily 'aartis', 'poojas' and 'darshan'.

The state government has asked the public 'mandals' to switch over to online 'darshan' or relaying the celebrations in the marquees through the local cable television networks, websites or social media platforms, as per the notification issued by Sanjay D. Khedekar, Deputy Secretary, Home Department.

For the 'Visarjan', children and senior citizens must avoid stepping out and as far as possible, the immersion ceremonies should be performed at artificial ponds which will be created by various public and private bodies, as in 2020, at the height of the first wave of Covid-19.

(The above story first appeared on LatestLY on Jun 29, 2021 08:29 PM IST. For more news and updates on politics, world, sports, entertainment and lifestyle, log on to our website latestly.com).