'Ganga Aarti' to Be Held from Bijnor to Ballia at 1,100 Places

The Uttar Pradesh government has started preparations for a grand celebration of the spiritual and sacred river Ganga. Right from Bijnor to Ballia, the Yogi government would soon perform 'Aartis' of 'Mother Ganga' (referred to as Goddess Ganga) in the state. 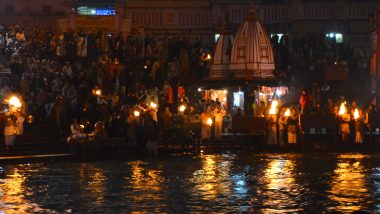 Lucknow, Jan 30: The Uttar Pradesh government has started preparations for a grand celebration of the spiritual and sacred river Ganga. Right from Bijnor to Ballia, the Yogi government would soon perform 'Aartis' of 'Mother Ganga' (referred to as Goddess Ganga) in the state.

There will now be a 'Ganga Aarti' (ritual of offering prayers to the Ganges river) held at Kashi and Prayagraj, among nearly 1,100 places in Uttar Pradesh. For this, the Yogi government is going to build 1,038 new 'Aarti' platforms from Bijnor to Ballia. As many as 1,038 villages on both sides of the Ganga, led by the 'Namami Gange' department, have been selected as new 'Aarti' sites. Maha Kumbh Mela 2021: Haridwar Gets Mythology-Themed Wall Graffiti to Make Tourists Aware of Maha Kumbh's Significance.

As per the proposed plan, the process of construction of new 'Aarti' sites in the villages situated on both sides within 5-km radius of the Ganges from Bijnor to Ballia would be started with the cooperation of the Tourism department. The new 'Aarti' sites would be operated on the basis of public participation. The 'Aarti' would be organised every day on the platforms.

According to the UP government, Ganga Ghat would be developed in these 1,038 villages from Bijnor to Ballia as religious sites. Instructions have also been given to construct charitable buildings in these villages situated within 5 kms of the Ganges.

In December, during the meeting of Jal Shakti Ministry along with other department officials, instructions were given to develop ancient and historical shrines and temples in these villages as tourist destinations.

As the ancient river Ganga enters Uttar Pradesh, starting with Bijnor, this series of 'Aarti' would continue till the last village of the state on the banks of the Ganges in Ballia.

By linking Ganga 'Aarti' with villages and towns, the Yogi government wants to make 'Ganga Swacchata Abhiyan' the biggest mass campaign. Through this campaign, the state government wants to further strengthen the attachment among the younger generation towards their culture and especially with the life sustaining Ganges.

Chief Minister Yogi Adityanath is making relentless efforts for the cleaning of river Ganga. The government has given more pace to the 'Ganga Swachhata Abhiyan' and is going to build sewage treatment plants (STPs) in 14 new districts soon.

62 STPs under construction in different areas of the state would also be ready soon and would be connected with the cleanliness drive of Ganga as well as other rivers. According to the Namami Gange department, the capacity of 62 sewage treatment plants under construction would be 1522.16 MLD (megaliters per day).

After the new treatment plants become operational, the total number of STP-equipped districts would increase to 41 in Uttar Pradesh. At present, there are a total of 104 STPs operating in the state, with a total capacity of 3,298.84 MLD. After receiving the new STPs, the Jal Shakti Ministry would be successful in preventing to a large extent the number of drains and polluted water entering the Ganges.

(The above story first appeared on LatestLY on Jan 30, 2021 02:02 PM IST. For more news and updates on politics, world, sports, entertainment and lifestyle, log on to our website latestly.com).