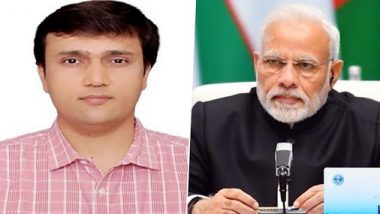 Prior to this appointment as the Deputy Secretary, Shah served as the Private Secretary to Prakash Javadekar, Union Minister for Environment. Shah is a law graduate and has also pursued his postgraduation in Environmental Engineering from Gujarat University (GU). Tina Dabi, IAS Officer, Appointed BRICS Panel's Honorary Advisor.

He is currently serving as Deputy Secretary in the Prime Minister's Office.

According to a report by Ahmedabad Mirror, Shah holds a post-graduate certificate in Environment Impact Assessment from University of Manchester. Shah also received fellowship from Kennedy School of Govt, Harvard University, for ‘Developing Design for Applicability of US Water Quality Trading Program in Indian Scenario’.

(The above story first appeared on LatestLY on Jul 30, 2020 07:29 PM IST. For more news and updates on politics, world, sports, entertainment and lifestyle, log on to our website latestly.com).