The Uttar Pradesh government on Tuesday told the Supreme Court that the Hathras Gangrape victim was created at night "to avoid large scale violence in the morning". The Yogi Adityanath-led UP government submitted an affidavit in the top court today. 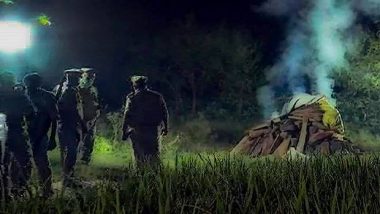 New Delhi. October 6: The Uttar Pradesh government on Tuesday told the Supreme Court that the Hathras Gangrape victim was cremated at night "to avoid large scale violence in the morning". The Yogi Adityanath-led UP government submitted an affidavit in the top court today. In the affidavit, the state government cited intelligence inputs of possible assembly of lakhs of protesters. Hathras Case: Priyanka Gandhi Attends Prayer Meeting For Victim at Maharishi Valmiki Temple.

The government said that the issue would have given caste or communal colour. The affidavit mentioned that a "vicious campaign" had been unleashed to defame the state government. The Uttar Pradesh government said that the apex court should direct the Central Bureau of Investigation (CBI) investigation into the matter and it should also monitor the probe into the incident. Hathras SP Vikrant Vir, DSP and Other Cops Suspended by UP Govt After SIT Submits Initial Report.

Statement by UP Government in the Supreme Court:

#Hathras case: District administration convinced parents of deceased to cremate her at night to avoid large scale violence in the morning, UP govt in affidavit to SC; cites intelligence inputs of possible assembly of lakhs of protesters & issue being given caste/communal colour https://t.co/9CshGV3x0p pic.twitter.com/twkJ6yqeyc

The 19-year-old Dalit girl was gang-raped by four upper caste men on September 1. She succumbed to her injuries  September 29 at Delhi's Safdarjung Hospital. Her body was allegedly cremated by UP Police in a hurry without the consent of the family members at night. However, the police refuted the allegation.

UP CM Yogi Aditynath had suspended five police personnel, including the Superintendent of Police Vikrant Vir.  The decisive action was taken against them after the Special Investigation Team (SIT) submitted its initial probe report. The 19-year-old has two brothers and two sisters. The family of the victim is upset at the fact that no action has yet been taken against District Magistrate Praveen Laxar, who allegedly misbehaved with the family and even threatened them.

Congress has been targeting the UP government over the incident. Protests have been organised by the grand old party across the country against the BJP-led UP government.

(The above story first appeared on LatestLY on Oct 06, 2020 11:54 AM IST. For more news and updates on politics, world, sports, entertainment and lifestyle, log on to our website latestly.com).