In its presentation made before the World Health Organisation on August 20 on Gujarat's COVID-19 prevention strategy, the health department said it distributed Arsenicum Album-30 to 3.48 crore people, which is more than half of the state's population of 6.6 crore. 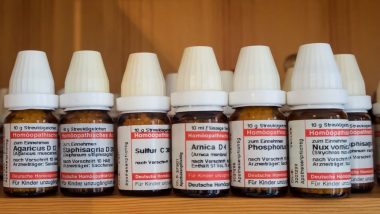 Ahmedabad, August 23: The Gujarat health department has said it distributed homeopathic drug Arsenicum Album-30 to more than half of the state's population as prophylaxis since March after the outbreak of COVID-19.

In its presentation made before the World Health Organisation on August 20 on Gujarat's COVID-19 prevention strategy, the health department said it distributed Arsenicum Album-30 to 3.48 crore people, which is more than half of the state's population of 6.6 crore.

There is no scientific evidence that the drug works against COVID-19, a fact stressed not only by medical scientists but by some homeopathic practitioners themselves.

The state government also claimed that 99.6 per cent of people who availed AYUSH (Ayurveda, Yoga & Naturopathy, Unani, Siddha and Homeopathy) remedies as prophylaxis during their quarantine period tested negative for coronavirus.

In its presentation, which was shared with the media, the health department said "AYUSH interventions have proven to be immunity boosters, and the AYUSH treatment protocol was developed and a research carried out for assessing efficacy of treatment."

"As many as 33,268 people benefited from AYUSH medicines in the quarantine period, half of whom availed homoeopathic medicines," it said. The state government claimed that 99.69 per cent of people who availed AYUSH remedies as prophylaxis during their quarantine period tested negative for coronavirus. Arsenicum Album 30 and Camphora 1m Homeopathic Medicines Being Given to Policemen in Maharashtra to Increase Immunity as Coronavirus Cases Spike.

However, a clinical trial related to the prophylaxis nature of Arsenicum Album-30 for coronavirus in the state has not yet yielded any conclusive result, an official said.

Gujarat Principal Secretary, Health, Jayanti Ravi on Sunday said the government has some reason to believe about theefficacy of Arsenicum Album-30 medicine, as out of thousands of quarantined people who were given the dosage of Arsenicum Album-30, "99.69 per cent eventually tested negative for coronavirus".

"Even 0.3 per cent who tested positive had only mild symptoms. We have prima facie reason to believe in some effectiveness of Arsenicum Album-30 against coronavirus. But to actually establish this, we need more rigorous analysis," Ravi said.

The government has so far distributed 3.48 crore dosages of Arsenicum Album-30 starting March, including repeat dosages as the medicine remains effective for 1.5 to two months, she said.

As per Bhavna Patel, director of state AYUSH department, the result of a clinical trial on Aresnicum Album-30 going on at a private clinic in Bhavnagar as prophylaxishas not yet shown any clear result.

Patel said the homeopathic medicine has been distributed since March on the recommendation of an expert committee, including homeopathic doctors, and a repeat order has also been given by the state health department for people who used it over a month ago.

"The AYUSH department used its channel of 272 dispensaries, and roped in officials of the local administration like TDOs (taluka development officers) and talatis (local revenue officers) to distribute the medicine. Health camps were organised with the help of NGOs to distribute this," Patel said.

"Arsenicum Album-30 boosts immunity, but our research is not yet complete on this. We have given approval for its private clinical trial as prophylaxisin Bhavnagar, but the result is not clear because it is not complete," she said.

Ahmedabad-based homeopathic doctor and member of national executive committee of the Homeopathic Medical Association of India, Shivang Swaminarayan, said the AYUSH Ministry recommended the use of the medicine as an immunity booster after finding that it benefited people.

However, it is better to consult qualified homeopathic doctors before taking the medicine, he said. Fact Check: ‘Arsenicum Album 30’ Homeopathic Medicine, Recommended by AYUSH Ministry of India To Cure Coronavirus Infection As Claimed? Here's The TRUTH!.

"It is always better to consult a qualified homeopathic doctor. Immunity is not everything in any disease. One should also look at one's general health, age, profession, how much risk he/she is exposed to...this is after all a medicine, and how to take it, and when and in how much dose, one needs to know this from qualified government or private doctors," he said.