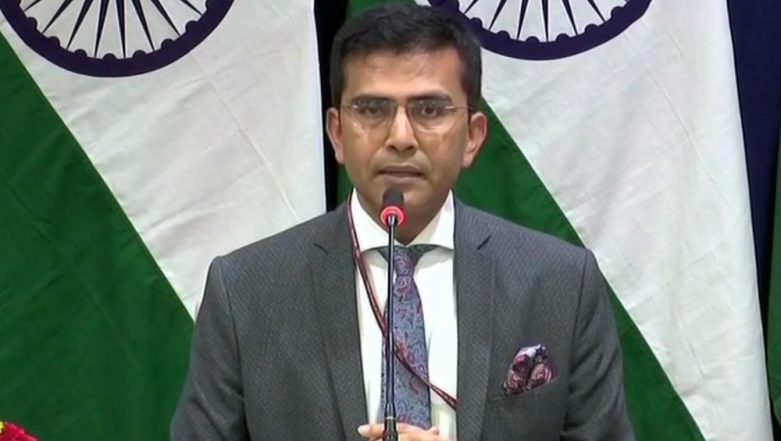 New Delhi, February 27: The Government of India on Wednesday stated that an Indian pilot had gone missing after a confrontation with Pakistani aircraft that tried to violate Indian air space today. MEA spokesperson Raveesh Kumar, while addressing the media today with the Air Vice Marshal, said that Pakistan F-16 tried to violate Indian air space and India retaliated to Pakistan's action. He further said that while one Pakistan aircraft was shot down by India, the IAF lost one MiG-21 Bison and the pilot of the same has been missing. Kumar added that they were trying to ascertain more details about the missing pilot. India-Pakistan Tension Live News Updates

"One Pakistan Air Force fighter aircraft was shot down by Indian Air Force. In this engagement, we have lost one MiG-21 Bison. Pilot is missing in action. Pakistan claims he is in their custody. We are ascertaining the facts," Kumar said.

#WATCH Raveesh Kumar, MEA: One Pakistan Air Force fighter aircraft was shot down by Indian Air Force. In this engagement, we have lost one MiG 21. Pilot is missing in action. Pakistan claims he is in their custody. We are ascertaining the facts. pic.twitter.com/Bm0nVChuzF

Earlier today, the Pakistan army claimed that it shot down two Indian aircraft and arrested an Indian pilot. The Pakistani Army also released a video of a man claiming to be an Indian pilot identifying himself as Wing Commander Abhinandan Varthaman. Pakistan Claims to Have Shot Down 2 IAF Aircraft And Arrested 2 Indian Pilots, Releases Video.

The claim came after the Indian Air Force chased away intruding Pakistani fighter jets in Jammu and Kashmir's Nowshera sector with India shooting down a Pakistani F-16 which fell on the Pakistani side. The aircraft fell three kilometres in Pakistani-occupied Kashmir.

The developments came a day after the IAF carried out strikes on a Jaish-e-Mohammed training camp in Balakot, killing "a very large number" of terrorists and their trainers. The IAF strike on the JeM training camp came 12 days after a suicide bomber killed 40 CRPF personnel in the worst terror strike in Jammu and Kashmir since militancy-hit the state in 1989. The attack was claimed by the Pakistan-based JeM.