Rafale Landing in India Today: First Batch of 5 Rafale Aircraft to Arrive in Ambala by 2 pm 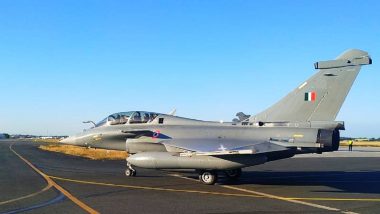 The Indian Rafales are expected to take off from Al Dhafra in UAE at around 11 am IST and reach Ambala by 2 pm, sources said. The backup base for the arrival of the aircraft in case there is a weather issue in and around Ambala would be the Jodhpur airbase. Section 144 Imposed in 4 Villages Closer to Ambala Airbase, Photography During Landing Strictly Prohibited

In view of Rafale fighter jets landing in the city, Section 144 has been imposed in four villages close to Ambala airbase. Munish Sehgal, DSP Traffic, Ambala, said the administration is on a high alert and the gathering of people on roofs and photography during landing has been strictly prohibited.

The administration has prohibited pictures of Air Force Station from places such as Dhulkot, Baldev Nagar, Garnala and Panjokhara. Ram Kumar, DSP Ambala, said that the Ambala Cantt area has been made a 'no-drone area' as it is a sensitive zone. Action will be taken against those violating "no-photography orders".

"The Ambala Cantt area is a 'no-drone area' as it is a sensitive zone. Also, no photography is allowed in the area. If anyone violates these orders, action will be taken against them," Kumar said. The police officers also made announcements and informed the local residents to not gather on roofs and engage in photography between 10 am and 05 pm on Wednesday.

The Indian Air Force is further boosting the capabilities of the combat aircraft by equipping it with the HAMMER missiles from France. The order for the HAMMER standoff missiles with the capability to take out any types of targets at the range of around 60-70 kms is being processed under the emergency powers for acquisition given to the armed forces by the Narendra Modi government.

HAMMER (Highly Agile Modular Munition Extended Range) is a medium-range air-to-ground weapon designed and manufactured for the French Air Force and Navy initially. Armed with the long-range Meteor air to air missiles and SCALP, the Rafales would give India an edge over both Pakistan and China in terms of air strike capability.

The pilots include Group Captain Harkirat Singh who is the Commanding Officer of the 17 squadron along with Wing Commander MK Singh and R Kataria. In a long-awaited development, five Rafale fighter aircraft took off on Monday for India from an airbase in France.

The fighter jets were flagged off by the Indian Ambassador to France from an airbase in Merignac, France where he interacted with the India crew flying it to India. The five aircraft flying to India include seven Indian pilots with the commanding officer of the 17 Golden Arrows squadron.

All the pilots have been trained on the aircraft by the French Dassault Aviation company as per the agreement signed for the biggest-ever defence deal signed by India in 2016 for acquiring 36 Rafale jets for over Rs 60,000 crore.