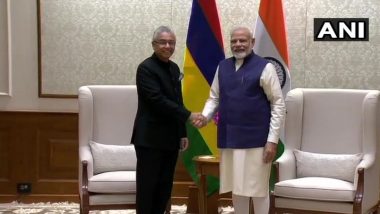 The Supreme Court building constructed with Indian grant assistance, the first such infrastructure project inside the Mauritius capital city, will be inaugurated via video conferencing in presence of senior members of the judiciary from Mauritius and other dignitaries from both countries. PM Narendra Modi Launches 'High Throughput' COVID-19 Testing Facilities in Noida, Mumbai and Kolkata, Says 'India in Better Position to Fight Coronavirus Than Others'.

According to the Ministry of External Affairs, the court's building symbolises the strong bilateral partnership between the two countries.

The court structure construction is one of the five projects under the USD 353 million Special Economic Package (SEP) extended by India in 2016.

The project has been completed within schedule and below expected cost. , The building is spread over an area of more than 4,700 sq m with over 10 floors and has a built-up area of around 25,000 sq m. The building flaunts a modern design and green features with focus on thermal and sound insulation and high energy efficiency. The new building will house all divisions and offices of the Supreme Court of Mauritius.

India is the largest development partner for Mauritius with extensive focus on people-oriented projects. The four other priority infrastructure projects built under India's SEP for Mauritius include Metro Express Project, which was inaugurated jointly in October 2019, by Modi and Jugnauth. The first phase of the metro has been completed and work is currently on for its second phase.

Work on a new ENT hospital in Mauritius has also been completed and work for a social housing project is underway.

Lines of Credit (LOC) worth USD 600 million at concessional terms have been announced for Mauritius with a priority focus on developmental projects.

Amid the border standoff with China and amid the ongoing COVID pandemic, New Delhi has been consolidating its outreach with countries in the Indian Ocean region. It was the first to send a medical consignment to Mauritius. This included Hydrocloroquine (HCQ) tablets and other essential medicines. A special consignment of Ayurvedic medicines was also sent to Mauritius. A dedicated Medical Assistance Team was also deployed in Mauritius to supplement local government's efforts against Covid-19 pandemic, officials said.

With Maldives, with whom India has revitalised its ties in the last one-and-and- half-years, New Delhi has announced another USD 400 million through an extended currency swap arrangement to tide over its liquidity shortage.

India is also set to soon announce another substantial financial assistance package to help the country through its post-COVID-19 economic recovery.

A number of big infrastructure projects, including an International Cricket Stadium, expansion of Hanimadhoo Airport, Gulhuifalhu Port project and setting up of a cancer Hospital have also been identified under the USD 800 million LOC extended by India to the Maldives.

Earlier this week Indian High Commissioner to Maldives Sunjay Sudhir handed over a symbolic cheque of MVR 85 million ($5.6 million) for the implementation of nine projects in the Maldives under the High Impact Community Development Projects (HICDP) scheme.

With Sri Lanka, India has announced a $400-million currency swap facility under the SAARC framework. India also reached a milestone with Bangladesh when the first shipment of container cargo from Kolkata arrived in Agartala via Bangladesh's Chattogram port. Indian Railways also handed over 10 rail locomotives to Bangladesh as part of grant assistance to Dhaka.