Is it A Bird or a Plane? Train 18 Doctored Video Posted by Piyush Goyal on Twitter; Netizens School Him With Original Vande Bharat Express Videos 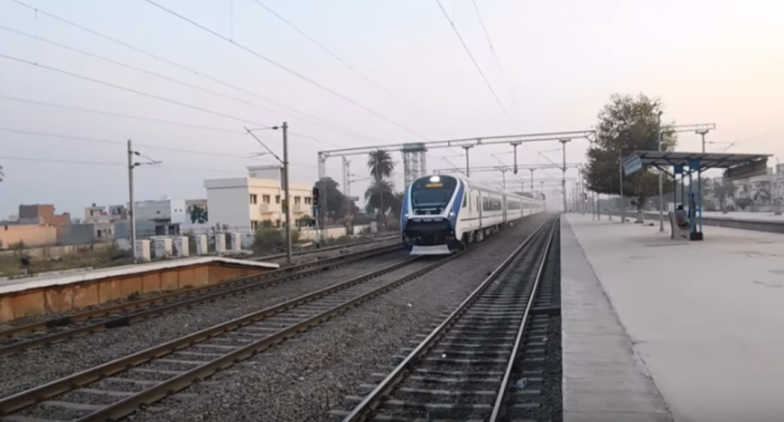 New Delhi, February 11: The Union Minister for Railways, Piyush Goyal on Sunday posted a video of the Train 18 which is renamed as the Vande Bharat Express. In the tweet, Goyal wrote, “It’s a bird…It’s a plane…Watch India’s first semi-high speed train built under ‘Make in India’ initiative, Vande Bharat Express zooming past at lightning speed.” The video was also posted on Goyal's official Facebook account.

After watching the original video it is clear that the video posted by Railway Minister was speeded up to twice its original speed. A side by side comparison of both the videos was posted by ALT news on Vimeo. Train 18 Encyclopedia: 10 things about India's Fastest Train Vande Bharat Express.

Some netizens also pointed out the video. One user posted twice speeded up video and advised Piyush Goyal to use it."Sir, Delete that and repost this instead," a netizen said.

Sir, Delete that and repost this instead 👇😂😂 pic.twitter.com/i7O3VJX6FQ

"It’s Not A Bird…it’s Not a Plane, IT'S A DOCTORED VIDEO posted Railway Minister @PiyushGoyal, The video was also retweeted by National General Secretary of BJP, @rammadhavbjp, Later by @republic," wrote another.

The video was also retweeted by Ram Madhav, the National General Secretary of the Bharatiya Janata Party (BJP). Some media houses also published an article echoing Goyal’s enthusiasm without fact-checking the video.

The much awaited Vande Bharat Express is all set for its maiden journey on 15th Feb. All are welcome to witness its speed and record its inaugural run between New Delhi and Varanasi. pic.twitter.com/8KeAeRJ4fp

Meanwhile, the Train 18 or T18 was renamed as the Vande Bharat Express on January 27. The train is set to run between Delhi and Varanasi at a maximum speed of 160kmph by replacing Shatabdi Express.