Train 18: Visuals From The Inside of 'Vande Bharat Express'; Watch Video 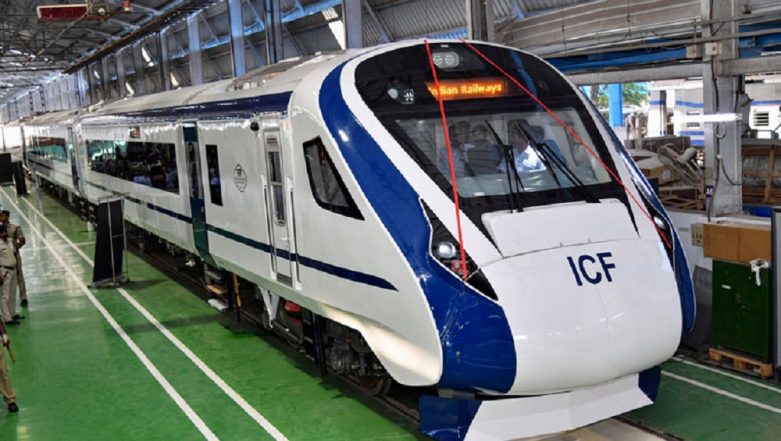 New Delhi, January 31: The Train 18, officially to be known as 'Vande Bharat Express', is set to turn operational in the next few days. In the trial runs, the Made-In-India train has clocked a speed of 180 km/hr, making it faster than the Shatabdi Express. Apart from reducing the commutation time, the new train also promises to offer the passengers the next level of comfort.

A YouTube vlogger sought access to the interiors of the train and posted a video when he went onboard. He was accompanied by his family. They took first-hand experience of the add-ons in the train, including the "super-comfortable seats", the tables for meals, washrooms and space between the compartments. Indian Railways Approaches PMO to Launch Train-18 with Fares 40-50% Higher than Shatabdi Express.

Visuals From The Inside of 'Vande Bharat Express'; Watch Video

The 16-coach Train 18 train, built in 18 months at a cost of Rs 97 crore by the Integral Coach Factory, Chennai, is regarded as a successor to the 30-year-old Shatabdi Express. It's also the first locomotive-less or engine-less train in the country.

Addressing the press on Sunday, Railways Minister Piyush Goyal said Train 18 will be known as Vande Bharat Express -- the name decided after taking suggestions from the general public.

The launch date, which is yet to be released, is expected to be fixed next month. Reports had earlier claimed that Prime Minister Narendra Modi would be inaugurating the train after the roll-out of Interim Budget 2019.