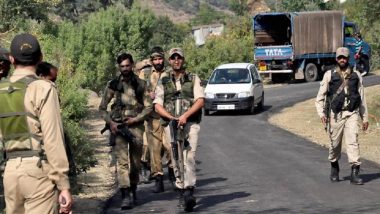 Srinagar, July 2: An unidentified terrorist was killed in an encounter between security forces and terrorists in Malbagh area of Srinagar, Jammu and Kashmir on Thursday night. In the incident, a Central Reserve Police Force (CRPF) official was also martyred. Earlier, security forces launched search and cordon operation in Malbagh area following information about the presence of terrorists there, a police official said. Jammu and Kashmir: One Terrorists Killed by Security Forces in Awantipora Encounter in Pulwama.

He said that the search operation turned into an encounter after terrorists open fired towards security forces positions. "One CRPF jawan has martyred. The QAT (Quick Action Team) jawan succumbed to his injuries in the hospital," officials said. Jammu and Kashmir: 3 Terrorists Killed by Security Forces in Zadibal Encounter in Srinagar.

On June 21, Security forces had neutralised three terrorists in Zadibal area of Srinagar. In a similar encounter of June 26, a terrorist was killed in Tral area of Pulwama's Awantipora.

(The above story first appeared on LatestLY on Jul 02, 2020 11:50 PM IST. For more news and updates on politics, world, sports, entertainment and lifestyle, log on to our website latestly.com).