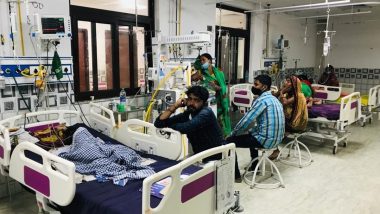 According to the health authorities, the children were admitted to the hospital following cold and fever infection. The nurses there gave them antibiotic injections on Sunday night. Immediately after the administration of injections, the children developed severe fever and shivering.

The parents were shocked by the development. The children were put under medication and the health authorities were verifying the antibiotic medicine that was used. Local BJP MLA Haratalu Halappa rushed to the spot and instructed the health authorities to look into the issue and administer proper treatment to children. Karnataka Hospitals Sealed After 7 Foetuses Packed in Boxes, Found Floating in Gutter.

"I reached the hospital immediately after coming to know about the incident. Have given instructions to the health authorities to immediately attend to the children. It is assumed to be an allergy as of now. As far as the drug is concerned, we will verify who and from where it was supplied," MLA Halappa stated. "I pray to God and keep hopes on our doctors for the recovery of children. The doctors are putting in efforts," he said.

(The above story first appeared on LatestLY on Jun 27, 2022 09:56 AM IST. For more news and updates on politics, world, sports, entertainment and lifestyle, log on to our website latestly.com).