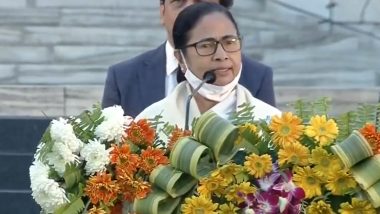 Kolkata, January 23: West Bengal Chief Minister Mamata Banerjee on Saturday refused to deliver a speech at an event organised to commemorate the 125th birth anniversary of Netaji Subhash Chandra Bose in Kolkata after some people chanted "Jai Shri Ram" slogans.  Mamata Banerjee said that she was insulted at the event which was organised by the Centre.

In anger, the West Bengal CM said, "I think Govt's program should have dignity. This is not a political program....It doesn't suit you to insult someone after inviting them. As a protest, I won't speak anything." Some individuals raised slogans of "Jai Shree Ram" and "Modi-Modi" when Banerjee was called on to the stage. PM Modi Participates in Parakram Diwas Celebrations on Netaji Subhas Chandra Bose's 125th Birth Anniversary.

#WATCH | I think Govt's program should have dignity. This is not a political program....It doesn't suit you to insult someone after inviting them. As a protest, I won't speak anything: WB CM Mamata Banerjee after 'Jai Shree Ram' slogans were raised when she was invited to speak pic.twitter.com/pBvVrlrrbb

Shortly after Banerjee, PM Modi delivered his speech. He said, "Netaji's life, work and decisions are an inspiration for all of us. Nothing was impossible for a person with such steely resolve." PM Modi also inaugurated commemorative stamp and a coin on Netaji Subhas Chandra Bose's 125th birth anniversary.

Earlier in the day, Banerjee also lashed out at the Centre to announce January 23 as 'Parakram Diwas'. "I don't understand the meaning of 'Parakram Diwas'. We celebrate the day as 'Deshnayak Diwas'," Banerjee said. She also stated that this year's Republic Day parade in Kolkata would also be dedicated to Bose.

(The above story first appeared on LatestLY on Jan 23, 2021 07:12 PM IST. For more news and updates on politics, world, sports, entertainment and lifestyle, log on to our website latestly.com).