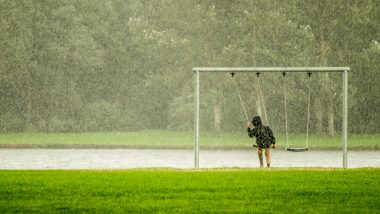 New Delhi, June 7: Fairly widespread to widespread rainfall activity is very likely over most parts of east India and adjoining central India from June 10 under the influence of a low-pressure area forming over the north Bay of Bengal and the neighbourhood, the IMD said on Monday.

It also said that southwest monsoon is likely to advance into most parts of Odisha, West Bengal and Jharkhand and some parts of Bihar, due to the low pressure area which is likely to form around June 11. The weather office further predicted enhanced rainfall activity along the west coast. Monsoon 2021 Update: Rainfall Activity To Gain Momentum in Maharashtra From June 11, Southwest Monsoon Advances Into Odisha, West Bengal, Jharkhand.

Due to strengthening of southwesterly winds and other favourable meteorological conditions, the IMD said, fairly widespread to widespread rainfall activity is very likely over northeastern states during the next 4-5 days.

Under the influence of the offshore trough at mean sea level from north Maharashtra coast to north Kerala coast, the IMD predicted, isolated to fairly widespread rainfall accompanied with thunderstorm and lightning over parts of south peninsular India during next 4-5 days.

(The above story first appeared on LatestLY on Jun 07, 2021 11:19 PM IST. For more news and updates on politics, world, sports, entertainment and lifestyle, log on to our website latestly.com).