In a horrific incident that took place in Odisha’s Khurda district, two men tied a man with a tree and thrashed him mercilessly. 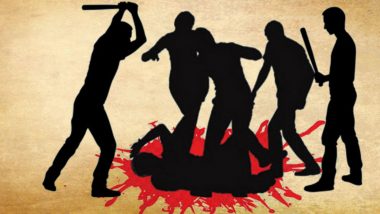 Bhubneshwar, December 22: In a horrific incident that took place in Odisha’s Khurda district, two men tied a man with a tree and thrashed him mercilessly. When the victim, identified as Soumya Ranjan Das of Bangida village, begged for water, the accused peed in his mouth. A case was registered and three persons including prime accused Rajendra Bhuyan and Gatia Paltasingh have been arrested, police said on Saturday. Odisha Shocker: Locals Pull Out Teeth of 6 Men, Make Them Eat Human Excreta on Suspicion of Practising Witchcraft.

Speaking to Hindustan Times, Superintendent of Police Ajay Pratap Swain said that Bhuyan and Paltasingh abducted Das on December 18, tied him to a coconut tree and assaulted him mercilessly. "They kicked the youth and one of them even peed in the mouth of the victim when he begged for water," Swain was quoted as saying. "The incident seems to have been triggered over past enmities," the senior officer said. Odisha: Woman Allegedly Gangraped at Knifepoint in Kalahandi, Video Goes Viral.

Following the incident, police arrested Bhuyan and Paltasingh who hail from Kaipadar village. Another accused, Bhatapada’s Soumya Ranjan Paikray, was also taken into custody. According to police, a girl from Das's Bangida village was in a relationship with a man from Kaipadar village. The girl's family had picked up the man a month ago and assaulted him.

In an act of revenge, Bhuyan and Paltasingh kidnapped Das, who is said to be a relative of the girl, and brought him to their village where they thrashed him. Residents of Kaipadar village watched the assault but no one intervened. The video of the incident was going viral in the area.

(The above story first appeared on LatestLY on Dec 22, 2019 10:47 AM IST. For more news and updates on politics, world, sports, entertainment and lifestyle, log on to our website latestly.com).